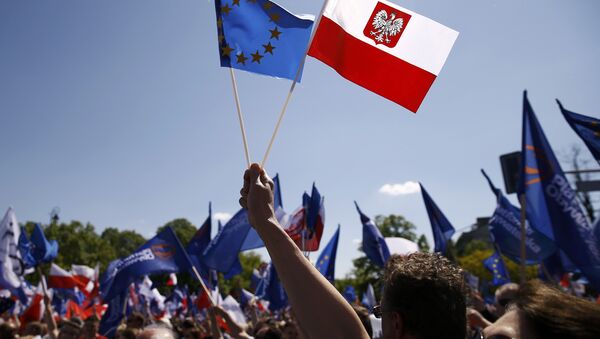 With the EU budget set to be reviewed in the wake of Brexit, Poland will find itself at the losing end receiving less money from Brussels while having to considerably ramp up its contribution to the EU coffers, the newspaper Dziennik Gazeta Prawna wrote.

Poland Leaks French-German Plan for EU Superstate Amid Brexit Chaos
With the UK out, emerging EU member states may feel the pinch of the scaled back financial assistance from Brussels, because Britain is the EU’s second-biggest donor after Germany.

According to Christopher Hartwell, President of the Center for Socioeconomic Studies in Warsaw, Poland will now have to pay 500 million euros more to the EU’s consolidated budget than it did before. Poland is the biggest beneficiary of EU funds in Central and East Europe.

Moreover, Poland is set to lose $1.2 billion annually sent home by an estimated 1 million Poles currently working in Britain, half of whom may now be ordered to leave the UK.

“The British referendum has added to the Polish authorities' headaches. As far as I know, only a fraction of our labor migrants are going to return home. Depending on how many of them actually get back, we’ll be able to see just how reformed our economy really is,” Tomasz Jankowski, an expert at the European Center for Geopolitical Analysis, said.

“This will show just how attractive our economy really is. With our unemployment rate now fluctuating around 10 percent, the arrival of 1.5 million Poles may now working in Britain, could double this figure,” he added.

Meanwhile, Poland’s zloty continued its post-Brexit slide to 6.2 per cent against the US dollar, underscoring the country’s heavy dependence on trading ties with Britain, which is its third largest after Germany and the Czech Republic.

Many experts warn that if the British economy slows down and falls into recession, Polish exports to the UK and would fall, adding to the country’s economic woes.