Identities of 3 Istanbul Attackers Known, But Not Confirmed - Official 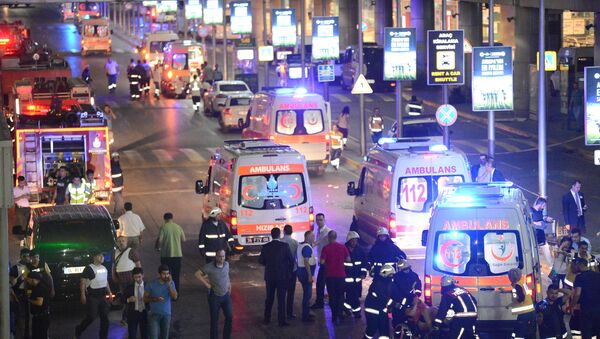 According to the US Secretary of Homeland Security, the government has been informed of the possible identities of the three suicide bombers who carried out the terrorist attack in Istanbul.

Istanbul Airport Attack Toll Climbs to 43, Including 19 Foreigners
WASHINGTON (Sputnik) — The US government has been informed of the possible identities of the three suicide bombers who carried out the Tuesday terrorist attack on the Ataturk International Airport in Istanbul, but the names have yet to be confirmed, US Secretary of Homeland Security Jeh Johnson said on Thursday.

"There are reports out of Turkey today about possible identity of these three attackers. We don’t have confirmation yet of their nationality or of their names," Johnson told the US Senate Judiciary Committee.

An American suffered non-critical injuries during the terrorist, Johnson added.

"One US citizen suffered, I understand, minor injuries," Johnson said in testimony to the US Senate Judiciary Committee.

Johnson confirmed a total of 44 casualties, including the suicide bombers, as well as "some 256 injured" in the attack.

Johnson further noted that the attack has "all the hallmarks" of a Daesh attack, "though there has been no claim of responsibility last time I looked."