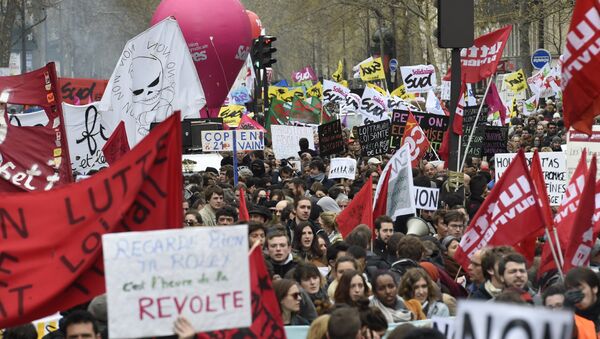 © AFP 2021 / MIGUEL MEDINA
Subscribe
Amid anti-labor reform protests that have swept across France, the government agreed to meet with the leaders of major unions to seek a resolution for the problem. Matthieu Bowla-Reba of the Union of Railroad Workers explains to Radio Sputnik that a specific strike culture allows French people to successfully fight for their civil rights.

French Gov't in Crisis Talks With Unions to Prevent Further Demos, Strikes
Talking to Loud&Clear host Brian Becker, Reba says that ongoing strikes go hand-in-hand with the inconveniences of everyday life for ordinary French people. The railways, as well as most gas stations and airports, have been paralyzed since the beginning of the national strike eleven days ago, preventing people from moving freely across the country. In Paris, the garbage collection was suspended, and the city began to resemble a junkyard in the midst of the high-profile Euro-2016 Football Championship.

Despite all the hardships, French workers fighting for their rights gain support from the rest of the nation.

“The French are ready for inconvenience in order to support workers’ struggle,” he said of the public’s perception of the situation in the country. “Nearly 70% of French are for Hollande to pull back the [Labor reform] law and stop his policies. Some 55% of the population supports the strikers.”

Reba explained that solidarity among the French people is conditioned by a strike culture that formed through a series of general strikes that took place throughout the 20th century. The 1968 national strike that nearly brought down the government, for instance, helped to shape the “collective legislation” and the “collective consciousness.”

As a result of those protests, the public won the right to express solidarity in support of those on strike, something that is outlawed in many countries. In the US, for instance, people can be persecuted for supporting protest movements.

“In France, it’s a part of our culture to come together from all sectors, all parts of our country in the same time in the same place [to go on strike],” he said.

Hollande in PR Disaster as Euro 2016 Kicks Off Amid Garbage Sacks, Strikes
Moreover, France has a network of powerful trade unions that lend comprehensive support for protesters during the strikes. The General Confederation of Labour (CGT), one of the five major confederations of trade unions in France, has raised a million euros in three weeks for the strikers.

Commenting on the Brexit referendum in the UK and its possible implications on the future of France, Reba said that the mass protests in the country are unlikely to result in a similar departure from the European Union. French workers aren’t opposed to the idea of the EU, Reba said.

“We don’t fight against Europeans; we fight for the interests of the workers’ class. They use neoliberal politics in the EU to break up rights of the workers, our way of life and our level of life.”

000000
Popular comments
Since a long time the French Working Class has been unified and organized. This is one of the primary reason of their development as a whole. We can see the same unity in present protests and revolutions.