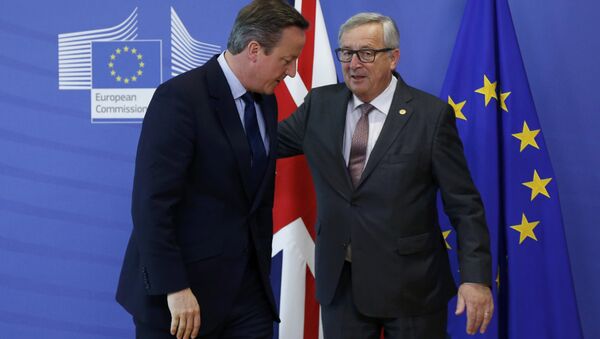 UK Prime Minister David Cameron heads to Brussels Tuesday (June 28), having suffered a career body blow after failing to persuade Britain to remain in the EU at the referendum he called for on June 23. He faces an uneasy meeting with his EU counterparts.

Cameron has lost political face, having been forced to resign following the shock result. There are now calls from Brussels for him to quickly invoke Article 50 of the Treaty of Lisbon — the exit provisions. However, Cameron has said he will hold off until the UK has a new prime minister.

We now expect the UK government to give effect to this decision of the British people as soon as possible https://t.co/gkGD7uCg2n

He said the statement could take the form of a letter to the European Council or a statement by the UK prime minister, which would be minutes, but — either way, it should be minuted and it must be clear and unequivocal.

I welcome my friend @David_Cameron in the @EU_Commission. #EUref pic.twitter.com/SGMme7mm3x

However, with European Council President Donald Tusk and Commission President Jean-Claude Juncker calling for the UK to act quickly and UK PM David Cameron saying it would be delayed until a new prime minister was sworn in, the timing has become an issue.

"In legal terms, there is no mechanism to enforce it. In legal terms, there is nothing the European Union could do to force the triggering event. That lies with the British Government. In political terms, for Article 50 to work, the British Government would like to take this into account. Ultimately, whenever the procedure is triggered, it would need to negotiate a settlement with the other states. The goodwill of the other states is necessary," Professor Koutrakos told Sputnik.

"Given the political crisis in the UK, some flexibility is inherent in the whole thing. I understand that the German Chancellor [Angela Merkel] suggests that there has to be some flexibility, given the fact that, at the moment, we just have a care-taking government, as it were."

David Cameron has said he would resign before the next Conservative Party conference, however, on Monday (June 27) the 1922 Committee — which triggers an election process — announced that the ballot would be opened Tuesday (June 28).

Some lawmakers in the European Parliament have called for fundamental reforms of the EU because of the migrant crisis, which has split Schengen and the troubles in the Eurozone. Sources in Brussels have told Sputnik that there is talk of an offer for the UK to remain in a fundamentally reformed union and run a second referendum on that basis.

“An open letter to my friends in Europe.” by @GeorgePeretzQC. Please RT, or adapt if you like. https://t.co/SJw9CTyRG6

​"It would also be quite difficult to see how such a radical reform [of the EU] could be put forward [at the June 28/29 summit] given the lack of agreement in the European Union itself about how to do things.

"It's not like the European Union has nothing to do. There's migration and there is the euro. Not all member states seem to be singing from the same hymn sheet. If anything these two incidents [migration and euro crises] have suggested that there is still an effort to try and find some common ground.

"Given the situation, it is very difficult to predict anything. I think there will be some kind of statement, which would recognize that there is some flexibility for the UK Government, because it's a care-taking government. On the other hand, member states of the European Union have made it very clear that they would not be prepared to wait indefinitely," Professor Koutrakos said.

"We are in uncharted territory. We are entering an area of staggering legal complexity. We should take these first statements with a pinch of salt and give the institutions of the states a bit of space to develop their position."