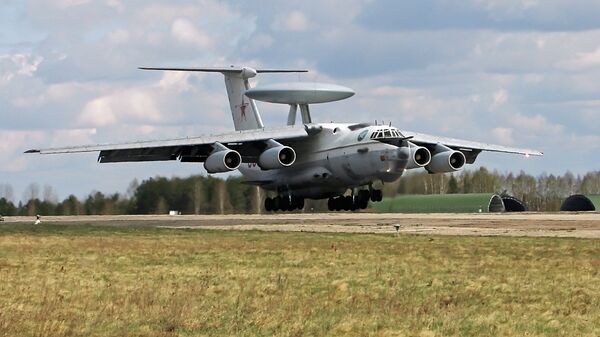 Ilya Tsukanov
All materialsWrite to the author
Russian military analyst Vladimir Tuchkov sorts through Russian and US Airborne Warning and Control System (AWACS) platforms, laying out the two countries' capabilities and offering insights into the future trajectory of the development of Russian systems.

Last month, the Russian Defense Ministry rolled out the A-50U – the Aerospace Defense Forces' most advanced airborne AWACS aircraft, at an air base in Russia's Ivanovo region. The platform for the new aircraft was the Beriev A-50, a Soviet-era design introduced in 1989. The A-50U, equipped with modern electronics equipment, is said to be "sharper-sighted," and features a longer range and better data transfer capabilities.

All-Seeing Eye: Russia Flies Out Bleeding-Edge A-50U AWACS Aircraft (VIDEO)
Commenting on the delay in the new plane's introduction in a piece for the independent online analysis portal Svobodnaya Pressa, Tuchkov noted that it was the result of the "blow dealt to the Russian aviation industry in the late 1980s and through the 1990s," from which it still has completely recovered.

Making its maiden flight in 2011, the A-50U entered service in 2013; to date, only three of the expensive, custom-built machines have been delivered to the Aerospace Defense Forces.

"However," the analyst noted, despite its expanded capabilities, "the A-50U is only an interim AWACS design. The foreseeable future will see the introduction of the A-100 'Premier', whose capabilities will surpass those of the A-50U. However, even the 'interim' plane has made a tremendous step forward" in Russian AWACS design."

The A-50U's AWACS equipment is based on the Il-76MD military transport, the workhorse multi-purpose four-engine turbofan strategic airlifter designed by the Ilyushin Design Bureau. The conversion of the plane into an early warning aircraft was done by the Taganrog-based Vega Radio Engineering Corporation, specializing in military radar, surveillance and command and control systems. 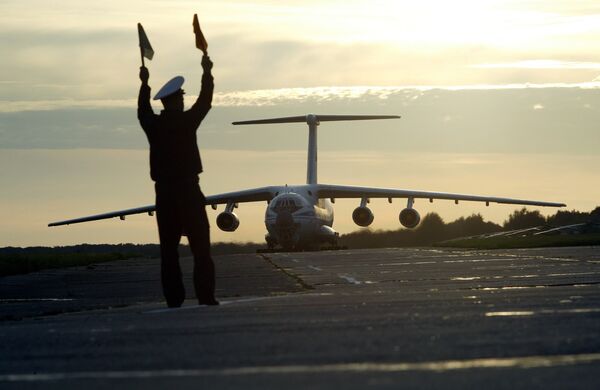 Tuchkov pointed out that "with the introduction of modern electronic components, it was possible to simultaneously reduce the size and weight of the equipment, to expand its functionality and to improve performance."

"By reducing the load on the engine, the range and patrol time for the Il-76MD platform was increased; whereas the A-50 had a range of 7,500 km, and could stay airborne for 9.3 hours [without refueling], the new aircraft's characteristics in this regard have improved by 15-20%."

No Secrets: Russia to Publish Catalog Disclosing US Military Satellites
"These characteristics are important," the analyst noted. "However, for an AWACS aircraft which is theoretically capable of performing multiple flight cycles without landing thanks to airborne refueling, it's the capabilities of the radio equipment that are more important. Specifically, we're talking about the radar, which serves as the core on which the rest of the electronics that serve it depend. The A-50 is equipped with Vega's Shmel ('Bumblebee') radio engineering complex. The A-50U, meanwhile, features the Shmel II. Their characteristics differ significantly."

For example, the analyst pointed out that where the Shmel is capable of detecting a missile launch at 800 km, the Shmel II can do so at a distance of up to 1,000 km. Where the Shmel tracks fighters up to 300 km, the Shmel II does so up to 400 km. In detection of maritime objects, both systems track objects to the horizon. And whereas the old system is capable of simultaneously tracking up to 200 objects, Shmel II can track 300 objects at once, and provide 40 targets for interceptors, instead of 30.

The new system, according to Tuchkov, also has increased capabilities for detecting low-contrast ground-based targets, and has increased radio range (2,000 km in HF and 400 km in UHF); at greater distances the system uses satellite uplink.

"The plane also has a self-defense system providing protection against enemy fighters in the front and rear hemispheres, including means of active and passive electronic countermeasures, flare countermeasures and radar reflectors."

The A-50U has a flight crew of five, with the radar systems themselves manned by 10 specialists, with more comfortable work conditions compared to the A-50, including a rest area and kitchen.

Ultimately, the military analyst noted, "it is expected that in addition to the 25 A-50 aircraft in service, another 20 A-50Us will be added. However, as we have already indicated, this is an interim option. The Aerospace Defense Forces need the A-100 Premier, whose radar will use an active phased array antenna," rather than the passive phrased array system installed on the A-50 and its modifications.

In 2012, the Vega Radio Engineering Corporation's deputy director general was "cautious about the time-frame [for the A-100's introduction], but did not skimp on the epithets. The new machine would surpass the best foreign analogues in parameters including range, the amount and detail of radar information provided. The plane was supposed to be delivered last year. Accounting for the delay in the introduction of its carrier – the Il-76MD-90A, which Vega received in 2014 – the deadline was moved a year. However, nothing has yet been heard of the plane's testing."

Moving on to the capabilities of Russian AWACS systems' chief competitor – the United States, Tuchkov recalled that "the 'freshest' American AWACS aircraft is the Boeing E-767, built on the basis of the popular passenger liner, which made its first flight in 1996. However, this aircraft is mainly intended for export. The US Air Force is equipped chiefly with the earlier-built Boeing E-3 Sentry, created on the basis of the Boeing 707. But the electronics onboard the two planes are identical." 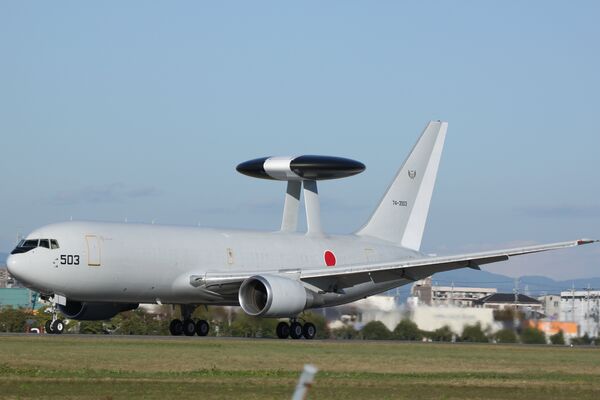 The E-3 Sentry's electronics are capable of tracking up to 300 targets. "Bomber aircraft are detected from a distance of 520 km, low-flying smaller targets can be detected from a distance of 400 km, and objects over the attitude indicator – up to 650 km from the aircraft. The complex works well in detecting inconspicuous targets: a radar cross-section target amounting to 1 square meter can be detected at a distance of 400 km. In principle, the characteristics of the Boeing's AN-APY-2 are roughly equal to those of the Shmel II."

"And while we wait for the A-100, Lockheed Martin has pulled ahead by releasing a new onboard radar – the AN/APY-9, with an active phased array antenna," Tuchkov noted. "Its specifications (as with the A-100) are unknown. But it is already clear that it will be capable of tracking more targets and directing interceptors to them, and feature greater range and resolution. Testing of the An/APY-9 has already been completed, and the system is beginning to be installed on the Grumman Advanced Hawkeye, designed for the US Navy. Moreover, there are excellent prospects for the sale of these aircraft to other countries. Consequently, in this segment the market for Russian arms will have to make room." 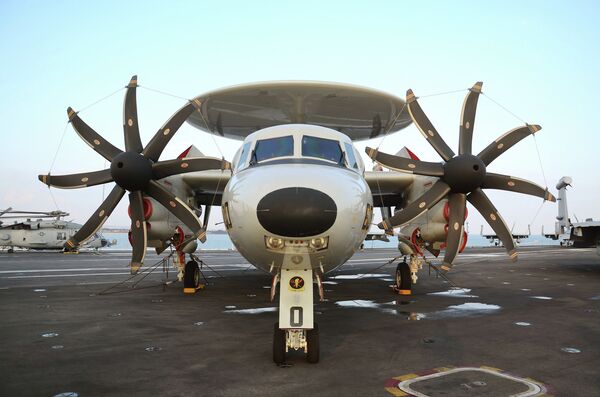 Ultimately, Tuchkov recalled, the Russian military "can console itself with the fact that satellite systems are able to solve many of the tasks of AWACS aircraft. And we are close to the adoption of such a system in the form of Liana electronic intelligence satellite. However, the more tools there are capable of solving the same problems, the higher our defensive capabilities."

Perfect Synergy: Su-30SMs Helped Russian Bombers Lock Targets in Syria
In addition, Russian Aerospace Forces, including the Su-35 fighter, are already equipped with Active Electronically Scanned Array (AESA) radar, "which has demonstrated excellent performance given its significantly smaller size. Therefore, the ability to create a modern radar system for AWACS aircraft is not in doubt; the question is in the timing."

"It is no accident that the US military has been watching anxiously the surge in development by Russia in the field of radio engineering. The US opposed the modernization of the Tupolev Tu-214ON" observation plane, built by the Kazan Aircraft Production Association and equipped for Treaty on Open Skies missions. "They fear," Tuchkov jested, "that the new electronics onboard the plane will allow Russia to find out all of America's secrets. And these electronics were also developed by Vega."