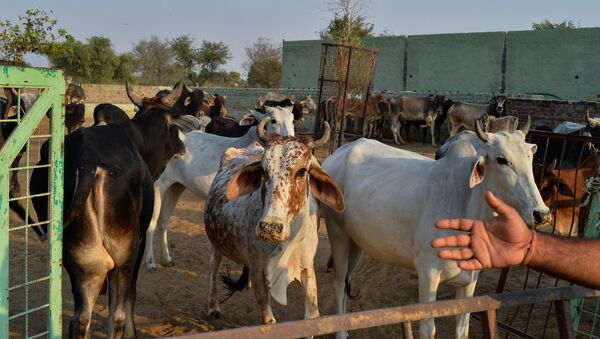 © AFP 2021 / Chandan Khanna
Subscribe
Chinese nationals working for a power project in Indian state of Madhya Pradesh are on the police’s radar for eating beef.

India Joins Missile Control Regime: ‘Now Has Role in Setting Geopolitics’
New Delhi (Sputnik) – The local police of Singrauli in the north Indian state of Madhya Pradesh have been enquiring after employees of the Sasan Power Project over the consumption of beef by Chinese nationals working in the power project.

The incident surfaced when Singrauli police seized around 65 kg of meat from the canteen which has been sent for testing to a laboratory in Bhopal.

The Chinese nationals are employed by a Chinese company involved in setting up the infrastructure in the Sasan Power Project.

Beef consumption is prohibited in the state of Madhya Pradesh, something which the Chinese nationals should have known about from specific guidelines issued to them.

Singrauli police have arrested four people who work at the canteen under the Madhya Pradesh Prohibition of Cow Slaughter Act. Police have also served a show cause notice to the HR department of the power project and sought details of the canteen contractors and customers.