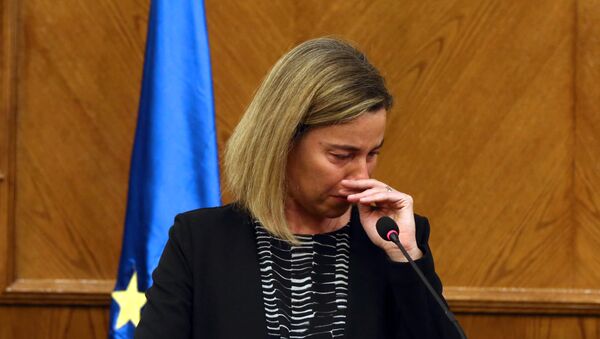 "Ahead of the European Council of 28 and 29 June, High Representative Federica Mogherini this weekend sent an advance copy of the EU Global Strategy on foreign and security policy to the Member States. She will formally present the strategy to the Heads of State/Government during this week's summit in Brussels," the EEAS press release reads.

According to Mogherini, the European Union needs a specific strategy and common action to respond to modern challenges.

"The purpose, even existence, of our Union is being questioned. Yet, our citizens and the world need a strong European Union like never before. In challenging times, a strong Union is one that thinks strategically, shares a vision and acts together. This is even more true after the British referendum. We will indeed have to rethink the way our Union works, but we perfectly know what to work for," Mogherini said in a foreword to the EU Global Strategy.

Mogherini: EU to Remain Strong Actor, Reliable Partner After Brexit
On Thursday, the United Kingdom held a referendum to determine whether or not the country should leave the EU. According to the final results, 51.9 percent of voters, or 17.4 million people, decided to support Brexit, while about 16.1 million opposed it.

Following the vote, different political forces in some EU states called for a similar referendums on the bloc membership.

Some EU officials and experts predict that Brexit may cause a domino effect among other EU states, which can undermine the bloc.