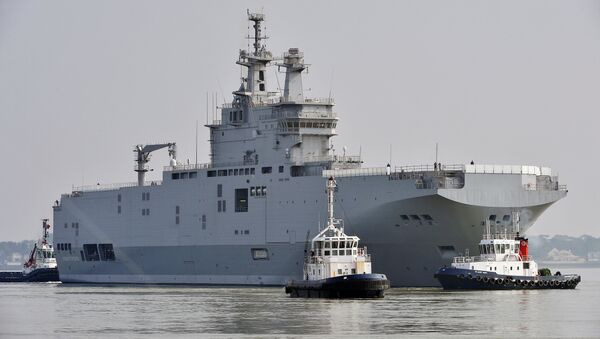 An RT correspondent stepped on board the French-made Mistral assault ship, shortly after it was reported that the first helicopter carrier of two purchased by Egypt from France had arrived in the African country's seaport city of Alexandria.

Russia to Build New Amphibious Assault Ship to Replace Mistral
Have you ever been on the deck of a Mistral assault ship? RT correspondent Amal al-Hinnawi was lucky enough to seize the opportunity while covering news about the first helicopter carrier of two purchased by Egypt from France arriving in Alexandria.

The warship, named after Egypt's former leader Gamal Abdel Nasser, is due to take part in joint drills being conducted by the French and Egyptian Navy, which are scheduled to take place in the Mediterranean Sea in the coming days.

Al-Hinnawi quoted local journalist Ahmed Ayoub as saying that the arrival of the Mistral assault ship will further add to "the Egyptian armed forces' defense capability so as to protect the country's national security."

She also cited French media as saying that most of the deal, which included the purchase of the two helicopter carriers, worth about one billion euros, was financed by Saudi Arabia.

She added that Egyptian officials, for their part, specifically underscored the importance of their country buying the Mistral, which will perform a variety of combat missions, as well as rescue and landing operations.

She said that the Mistral is expected to strengthen Egypt's military potential to attack possible enemy targets, as well as boost the security of its oil and gas platforms in the Mediterranean Sea and the Red Sea.

"In 2014, President Abdel Fattah el-Sisi said that Egypt is at gunpoint.  Given the increasing number of terrorist attacks in the north of the Sinai Peninsula and instability in the region on the whole, building up arms remains a necessary measure for Egypt in spite of the growing economic crisis," she concluded.

Shortly afterwards, French President Francois Hollande confirmed that a deal had been reached with Egypt for the delivery of the two Mistrals to the Arab country.

France handed the first Mistral-class helicopter carrier over to Egypt on June 2. The second ship is set to be transferred in September of this year.