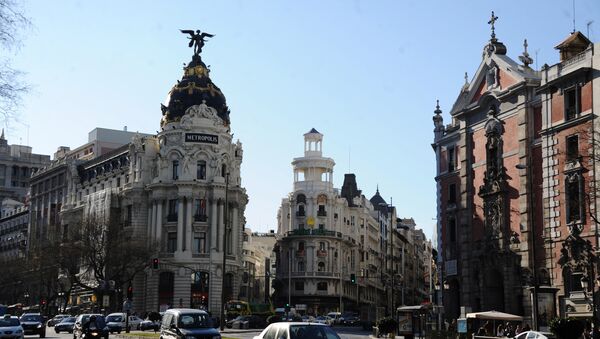 © Sputnik / Alexei Filippov
/
Go to the mediabank
Subscribe
International
India
Africa
Spanish voters will go to the polls on Sunday to elect the parliament that will attempt to form a new government.

MOSCOW (Sputnik) — The early parliamentary vote was called after four rival parties that came top in December’s election failed to agree on a unity government. Since then Spain has been governed by a caretaker cabinet of acting Prime Minister Mariano Rajoy’s conservative Popular Party (PP).

The parliament, known as the Cortes Generales (General Courts) in Spanish, is the Kingdom’s senior legislative body. It is bicameral, with both houses elected on the basis of universal suffrage.

The center-right PP, the center-left Socialist Workers' Party, the left-wing Podemos and the liberal Citizens will be vying for seats in the 350-seat lower house, the Congress of Deputies, and for 208 seats in the 266-seat Senate.

Elections in Spain begin with a king’s decree, which is approved by the cabinet and signed off by the prime minister. Constituencies are drawn based on provinces.

The Congress of Deputies is elected every four years. Each electoral district chooses an initial minimum of one deputy, with the remaining seats distributed proportionally by voters. Enclave cities of Ceuta and Melilla on the northern African coast are represented by one deputy each.

Spanish People's Party Says Seeks to Restore Friendly Relations With Russia
A party needs to clear a 3-percent threshold of valid votes to take part in the distribution of mandates in a respective electoral district. Deputy elections in Ceuta and Melilla are held according to the majority system.

The Senate is elected every four years based on territorial representation. Each province elects four senators on the basis of a universal secret ballot.

Senators are elected by direct voting based on the majority system. In the Canary and Balearic islands provinces, each island elects three senators. Islands of Ibiza-Formentera, Menorca, Fuerteventura, Gomera, Hierro, Lanzarote and La Palma elect one senator each. The cities of Ceuta and Melilla elect two senators each.

The Law of Gender Equality stipulates the balance between men and women among the candidates, with 40 percent of each gender on the candidate lists. The proportion must be roughly equal in the lists for elections to the Senate.

Podemos Threatens Spain's Unity By Backing Catalan Independence Referendum
Only Spanish citizens over 18 years old can be elected. Those obliged by virtue of their state or public office to maintain political neutrality – the Spanish royal family, chairs of top courts, the chief prosecutor, judges, as well as military personnel on active duty and police – are barred from running.

Voting is based on closed and blocked lists of candidates so that voters cannot introduce amendments and corrections to it. The deputy seats are distributed according to the numeric order in the list. In case of a lawmaker’s dismissal, refusal or death, a candidate following him on the election list takes his place.

Only listed voters of eligible age are allowed to cast ballots. The voting is secret. The counting of votes starts as soon as the polls close.