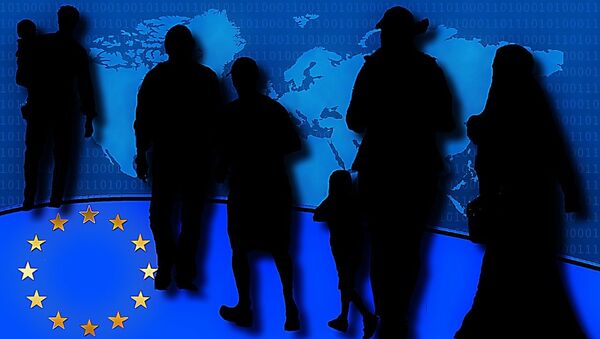 CC0 / /
Subscribe
International
India
Africa
Friday, June 24 will be forever known as the day Britain left the EU, an event which sent shock waves across the country and Europe.

According to Greek journalist Paschos Mandravelis, the reasons for leaving the EU have been stirred up by populist groups such as UKIP, and this is a growing trend across the continent.

"Well the Greek reaction is shock everywhere. Nobody expected it. Everybody went to bed expecting Britain to stay in the EU and we woke up to them leaving the EU," Paschos Mandravelis told Sputnik.

Mandravelis also believes that this will have a ripple effect on the rest of the EU and specifically, Greece.

Brexit will impact the Greek economy in so many ways and relations between EU states will start to diminish.

"The problem with Greece is that it's complicated. If you are in intensive care, as the Greek economy is now, the last thing that you need is an earthquake under the hospital. So, this will affect the Greek economy in multiple ways — not to speak only about the tourism industry — on which we rely a lot, but the possible recession of the European economy will affect our relationships because now, we are borrowing money from the European economy, so it will become harder to do so," Paschos Mandravelis explained to Sputnik.

But the question that arises from all of this is — why did people vote to leave the EU?

Where did this rhetoric stem from? Mandravelis believes that this is the beginning of people speaking up for themselves and standing up for what they believe is right and that it is an anti-political statement.

"The problem with politics is that it has become so complicated that people cannot understand how political decisions are made. Especially, at a European level where you have to combine the sensitivities of 27 different countries — this group has workers, business owners — everything. So, I wouldn't narrow it to anti-EU sentiment but an anti-politics sentiment that is not only in Europe but in the United States also. We see what success Donald Trump has had with the middle classes," Mandravelis told Sputnik.

#Brexit May Trigger Similar Referendums in Other EU States
The second reason could be down to a loss of faith in financial institutions such as the International Monetary Fund (IMF).

People have seen the plight of the Greeks and of course, have sympathized with their situation.

Paschos Mandravelis believes that the issues surrounding austerity have driven this massive political change and created anger towards governments that no one could have predicted.

"Yes, a lot of people in Greece don't understand why austerity is necessary for a country, that is not producing as much as we need to, to keep the consumer level as it was before the crisis. And this creates a lot of anger against politicians. It's too complex for the middle [average] man to understand" Paschos Mandravelis said.

However, one of the key issues that always seemed to emerge during campaigning was the subject of immigration.

Nigel Farage, Leader of the UK Independence Party (UKIP), produced a poster showing the number of refugees traveling into Europe last summer, it was deemed racist and xenophobic. Many thought leaving the EU would solve the problem of immigration, it would stop the free flow of people and prevent refugees from gaining access to Britain.

domdyer70: RT UK__News: Nigel Farage's anti-immigrant poster has been reported to the police amid claims it incite… pic.twitter.com/5B4KN6IO7V

However, Mandravelis believes that leaving the EU will not stop mass migration, regardless of what the politicians say.

"Yes, that affects a lot of the populist sentiment and was cultivated by populist politicians. Immigration is a fact of life — it's going to happen. You cannot seal the borders in the way that they populists are saying, so that people can't get in. We have to cope with that problem with the sensitivity that our culture and our civilization demands and we have to make some hard decisions. There is no way you can find a perfect solution for immigration. We will have immigrants, we will have populations moving across continents and we have to do the best we can to cope with this problem," Mandravelis told Sputnik.

For now though, once everything has been said and done, Britain will have to move forward and will need to establish trade agreements and begin negotiating with various countries in order to maintain its survival.