Chaos Over UK Markets, Currency and Jobs Due to Brexit 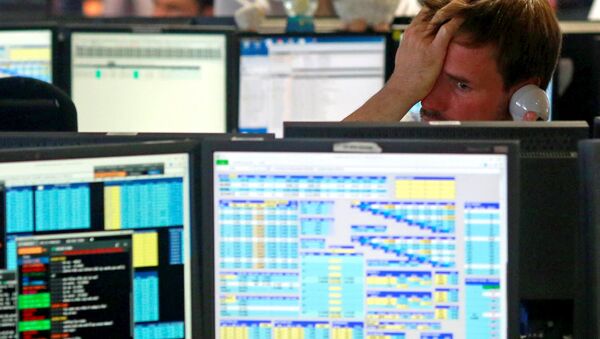 The Dow Jones Index opened down by about 500 points on Friday morning, while the FTSE 250 index at the London Stock Exchange was losing over 1100 points by Friday afternoon. Besides, the sterling pound hit low bottom, slumping to pre 1981 levels.

Waiting to see what's going to happen to the Dow Jones Index when it opens at 8:30 like… #EURefResults #Brexit pic.twitter.com/BathJhBUuS

"The pound will likely keep depreciating over the next two years at least. The uncertainty prevailing while the UK and EU authorities renegotiate their treaties will prevent markets from catching up again," a financial expert told Sputnik.

And with no one surprised, The Pound is taking an absolute beating. This is what happens when xenophobia trumps good sense #Brexit

The source — speaking on condition of confidentiality — added that depreciation would fuel inflation and make it harder to import anything.

"This would eventually increase the cost of living for people living in Britain," the expert told Sputnik.

Brexit will also have a marked impact on jobs. While EU citizens who are currently employed in the UK, and vice versa, are unlikely to be noticeably affected by the UK-EU split, it is likely that companies will stop recruiting staff in the UK.

"Over the past few months, recruiters have stopped hiring anybody. That's because of uncertainty on possible new post-Brexit legal impediments. So, it's very likely that some jobs will be lost."

As London loses its status of EU capital's of banking and innovation and shrivels into a UK-only city, some companies could decide to decamp to more alluring places in the Union.

In for a penny, in for a pound, because now they are worth the same. #Brexit

Here's what happens now Britain has voted for #Brexit in EU referendum https://t.co/O0j822teYphttps://t.co/Clvk2idcoi

Morgan Stanley has already made clear that it is relocating 2,000 key investment banking staff from London to either Dublin or Frankfurt, however they have denied any such allegations.

"Something similar could happen throughout the banking and finance industry, which could start eyeing new locations such as Zurich, Shanghai or New York," the expert underlined.

"They'll just trim down their London staff, once the UK is not part of the EU anymore."

According to Sputnik's source, the only real way to avoid such a disaster is for the British Parliament to not act upon the referendum's verdict and trigger the Artcile 50 procedure for leaving the EU.

"Constitutionally speaking, the referendum is valid only if it gets approved by MPs," the source told Sputnik.

"I know it's politically very difficult, but the risk is that, if the UK legislator don't do it, the EU could decide to make an example of the UK, in order to scare other members off the idea of leaving. That could be very painful."

000000
Popular comments
This is SPECULATION. Monday morning all begin to fall down in it's place. U.K will remain in E.U for a long time, while they will try to end UKIP, arrest them all, or do a coup. Or accuse them of violent nationalism. There are talks already. E.U don't want to let U.K go. And will go length's to do it. Prepare to witness what will be next to refuse to allow U.K out. The may KILL FARAGE and accuse PUTIN of doing it, sending a NATO sniper or something. That''s why Cameron stepping down.He knows that in the next 24 months, E.U will try all possible to keep U.K in. And NATO , E.U, U.S , JAPAN maybe trying to SPLIT Russia. reason for the encroachment. Russia should begin a mil /sec alliance. IF not CSTO, then CSTO can participate.
cast235
24 June 2016, 19:27 GMT1
000000
Hope it doesn't affect much the world economy...

Bose
24 June 2016, 20:26 GMT
000000
Newsfeed
0
New firstOld first
loader
LIVE
Заголовок открываемого материала
Access to the chat has been blocked for violating the rules . You will be able to participate again through:∞. If you do not agree with the blocking, please use the feedback form
The discussion is closed. You can participate in the discussion within 24 hours after the publication of the article.
To participate in the discussion
log in or register
loader
Chats
Заголовок открываемого материала
Worldwide
InternationalEnglishEnglishMundoEspañolSpanish
Europe
DeutschlandDeutschGermanFranceFrançaisFrenchΕλλάδαΕλληνικάGreekItaliaItalianoItalianČeská republikaČeštinaCzechPolskaPolskiPolishСрбиjаСрпскиSerbianLatvijaLatviešuLatvianLietuvaLietuviųLithuanianMoldovaMoldoveneascăMoldavianБеларусьБеларускiBelarusian
Transcaucasia
ԱրմենիաՀայերենArmenianАҧсныАҧсышәалаAbkhazХуссар ИрыстонИронауОssetianსაქართველოქართულიGeorgianAzərbaycanАzərbaycancaAzerbaijani
Middle East
Sputnik عربيArabicArabicTürkiyeTürkçeTurkishSputnik ایرانPersianPersianSputnik افغانستانDariDari
Central Asia
ҚазақстанҚазақ тіліKazakhКыргызстанКыргызчаKyrgyzOʻzbekistonЎзбекчаUzbekТоҷикистонТоҷикӣTajik
East & Southeast Asia
Việt NamTiếng ViệtVietnamese日本日本語Japanese中国中文Chinese
South America
BrasilPortuguêsPortuguese
NewsfeedBreaking
15:44 GMTIsrael Will Reportedly Push US to Strike Iranian Facility Amid Lack of Progress in Vienna Talks
15:41 GMTAmerica Unveils First-Ever Strategy to Battle Corruption at Home and Abroad
15:30 GMTChina May Build Military Base in Equatorial Guinea Amid Beijing’s Tensions With Washington
15:15 GMTKremlin: Putin Will Listen to Biden's Proposals on Ukraine 'With Great Interest'
15:15 GMTNYC to Use 'Preemptive Strike' Against Omicron With Vaccine Mandate for all Businesses, Mayor Says
15:08 GMT3,000 Security Officers Guard India's Mathura as Hindu Group Threatens to Install Idol in Mosque
14:59 GMTAmid Rumours of US Boycott of Beijing Olympics, How Could the Move Affect the Games?
14:52 GMTUK Policing Minister Not Surprised Over Reports of Drug Use in Parliament Building
14:45 GMTLabour Unions Protest in Brussels Against Low Wages, Expensive Electricity - Photos
14:26 GMTSpanish Court Rules Employee Can be Fired for Job Abandonment During Pandemic - Reports
14:18 GMTAnger and Shock After Intruders Vomit and Urinate at Site of Manchester Arena Bombing Memorial
14:15 GMTUS, UK, Canada Concerned by Tigrayans Arrested Without Charge in Ethiopia
14:07 GMTLionel Messi, Neymar or Himself: Kylian Mbappe Reveals Who's 'Boss' at Paris Saint-Germain
13:58 GMTFormer Indian Shia Leader Embraces Hinduism After 'Death Threats From Muslim Groups'
13:48 GMTMarine Le Pen Accuses EU of 'Playing Role of Firefighter-Pyromaniac' in Ukraine-Russia Tensions
13:47 GMT'Happy a Team Like Barcelona is Interested in Me', Says Salah Amid Liverpool Contract Impasse
13:30 GMTEarth is Getting Its Own Black Box That Will Tell What Caused Humanity's Demise
12:58 GMTChina Says Plots to Thwart Ties With Solomon Islands 'Doomed' as PM Survives No-Confidence Vote
12:53 GMTPutin in Meeting With Modi, Discusses Drug-Trafficking, Terrorism and Situation in Afghanistan
12:46 GMTSri Lanka Demands Compensation From Pakistan Over Brutal Mob Killing of Factory Manager