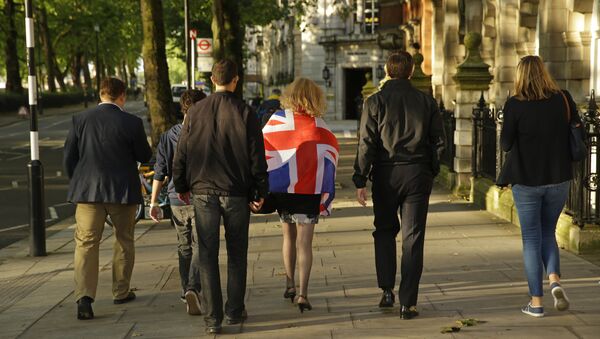 The sensational results of the British referendum plunged the whole Europe into deep shock. The astonishment was perhaps even harder for Scandinavia, which has traditionally seen the United Kingdom as its closest ally in the EU.

The Domino Effect: Swedes Eye Brexit, and Some are Even Inspired
The results of the Brexit came in on Midsummer's Eve, a holiday which normally sees the Nordics spending the day in the countryside with friends and family, enjoying all the delights of summer. Many predict the Brits' decision to turn their backs on the EU will hit their Nordic associates hard, with prospects of ‘Swexit' and ‘Fixit' arising.

Sweden's current minister for EU affairs, Ann Linde, who has been a staunch supporter of the European Union, commented on Twitter that she was "disappointed" about the news, saying that it would be "a Midsummer of wilting flowers." However, she ensured that Sweden would "continue to work for a prosperous Europe."

Good Morning EU — we will continue to work for a prosperous Europe and face challenges together. pic.twitter.com/bZwj6RgQvC

​At present, a full 72 percent of Swedes want their country to remain faithful to the EU, recent surveys by pollster SIFO showed. However, calls for a ‘Swexit' were immediately heard on Friday morning, with both the left and the right congratulating the Brits on their decision. Jonas Sjöstedt, the leader of the Left Party, demanded to renegotiate the terms of Sweden's EU membership.

​The far-right Sweden Democrats' press secretary Henrik Vinge also hailed the outcome of the referendum. "Bloody well done, Mr. Farage," he tweeted, referencing to the head of the UK's anti-EU UKIP party, which played a major role in the Brexit campaign.

​The Sweden Democrats are the only party in Sweden who earlier demanded a similar referendum to be held in Sweden. Gustav Kasselstrand, former president of the party's Youth League SDU, wrote on his Twitter that the era of globalization was over. Kasselstrand, who describes himself as nationalist and earlier stepped down in protest against the party's "increasingly social-conservative orientation," believes the EU will ultimately fall apart.

"The nations will wake up from their lethargy. A new Europe is emerging," Kasselstrand wrote on his Twitter feed.

​In Finland, former Prime Minister Alexander Stubb, who was prime minister in 2014-15 and finance minister until this week, called Britain's vote to leave the EU Union a "bad nightmare" as Europe's leaders woke to a shock result that will undoubtedly rock the 28-nation bloc.

"Please tell me I'm still sleeping and this is all just a bad nightmare!" Stubb wrote on his Twitter feed.

Please tell me I'm still sleeping and this is all just a bad nightmare! #Brexit

'Fixit' Nears? Rebel Finnish Heavyweight About to Start Own Anti-EU Party
​In Finland, pressure has been mounting from the former Prime Minister, who earlier this year registered a fresh anti-EU party in hopes of making ‘Fixit' reality.

Danish Prime Minister Lars Løkke Rasmussen said on Friday morning that he was disappointed in the United Kingdom's decision to leave the EU.

"We must respect the choice that the majority of the British people have made. At the same time, I won't hide the fact that I think it is a very sad result for Europe and for Denmark," Rasmussen said in a statement.

By his own admission, Rasmussen was hoping the UK would nevertheless choose some sort of "tight relationship" with the EU and ensured that Denmark's relationship with the union would not be affected by Brexit, stressing Copenhagen's economic and political dependence on the European community.

However, positive reactions came from the usually opposed camps, as was in case of Sweden.

"It is great considering all the intimidation campaign. There has been talk of an economic meltdown, and the UK's safety has been questioned. Nevertheless, they have made the choice. It is bold and it proves that the British are a self-conscious people," the Danish People's Party's EU spokesman Kenneth Kristensen Berth said according to Danish Radio.

The Red-Green Alliance considered Brexit a victory for democracy and proposed Danes to hold a similar referendum the following year.

"Today, the EU prevents Denmark from banning dangerous chemicals in toys, prevents us from putting an end to social dumping and calls for cuts in welfare throughout Europe. And all this is happening at the European peoples expense," the party's spokesperson Pernille Skipper said as quoted by Danish Radio.

Benefit of Doubt? Brits Unsure if Norway is Good Enough for Brexit
Even in Norway, which has chosen to stay outside the EU, politicians were apprehensive. Norwegian Prime Minister Erna Solberg said on Friday morning that she is worried about the knock-off political consequences of Britain's decision to leave the EU.

"I think this will create a more introverted Europe, which will be concerned with finding solutions to organizational problems instead of providing solutions to the issues voters really want addressed. Such as how do we secure enough growth? How do we create jobs?" Solberg said told Norway's national broadcaster NRK.

The final result of Thursday's EU referendum showed that 51.9 percent of British voters had backed Brexit.