US Media Casting Shade on Russian Cooperation in Arctic Council 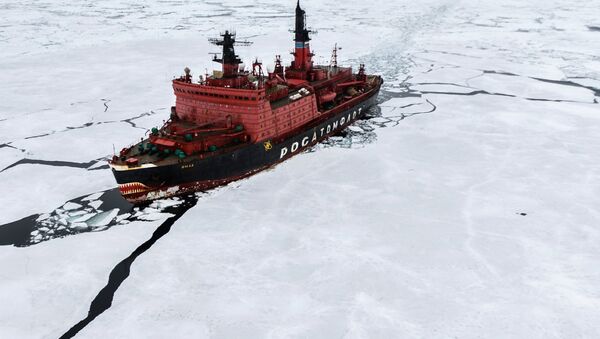 The US media is downplaying Russia’s vast cooperation within the Arctic Council, US Representative for the Arctic Robert Papp said in a speech at the Scandinavia House in New York City.

NEW YORK (Sputnik) — The United States chairs the Arctic Council until the May 2017 ministerial meeting scheduled to be held in Fairbanks, Alaska.

"I’ve been a little concerned about sort of the tone and tenor of some of the articles I’ve seen across our country. Most of the articles I think are formed by looking through the lens of Ukraine and Crimea," Papp stated on Friday.

Despite media reports, Papp added that Russia’s contributions to the Arctic Council are vast and political roadblocks do not exist.

Russia is acting in full compliance with international law regarding its claim submitted to the United Nations to expand its Arctic continental shelf, Papp stated.

"Russia is doing everything in compliance with the Law of the Sea treaty so I applaud them for their efforts."

US Unlikely to Request Russian Expertise to Build Icebreakers
Russia has been seeking the recognition of an expanded resource-rich outer limit of the continental shelf (OLCS) since 2001, but has been turned down due to a lack of geological evidence that the territory is a natural continuation of Russia's shelf.

Moscow submitted a revised application to the United Nations in August 2015.

Russia is one of the five Arctic nations – alongside the United States, Canada, Norway and Denmark – that have been laying claims to hydrocarbon deposits located in its offshore Arctic border areas.

An in-depth discussion on the issue of Russia’s extension of its Arctic shelf claims will be held at the United Nations on August 8-12.

The Law of the Sea was created by the United Nations in 1982 and defines outer limit lines of continental shelf for coastal states and their exclusive economic zones.

Brexit to Have No Effect on Arctic Council

Brexit to Remove US Insider View on EU Security Policy
The UK referendum vote on leaving the European Union will likely have no impact on the Arctic Council, US Representative for the Arctic Robert Papp told Sputnik.

"I don’t think there will be an impact on the Arctic Council," Papp said on Friday, after the final results of the Thursday referendum were released, showing that 51.9 percent of the voters supported Brexit (UK leaving the EU).

Papp explained that any changes within the bloc are unlikely to affect the council because there is currently no agreement to grant the European Union observer status within the Arctic Council, which promotes cooperation and interaction among Arctic states.

"We don’t have consensus on that at this point."

US ‘Jealous’ of Russia’s New Icebreaker

Less is More: Russia Opts for Lower-Cost but More Capable Navy
The United States will develop its own icebreakers following the launch of the largest ice breaker in the world by Russia earlier this month, Papp told Sputnik.

"I’m jealous, I wish the United States was launching the biggest icebreaker. The Russians, I applaud them for their continued development of infrastructure to deal with their arctic responsibilities and I’m hopeful the United States will continue to develop our capabilities as well."

US President Obama pledged in 2015 to allocate money for the development of additional icebreakers, a decision that Papp supports.

"We don’t have to have the biggest icebreaker or the fastest icebreaker, we need an icebreaker we can use in the Arctic and in the Antarctic and president Obama has asked for funding to do that."

Earlier this month, Russia launched the world’s largest nuclear-powered icebreaker dubbed "Arktika." The ship, which is worth $1.2 billion, will be commissioned in December 2019.