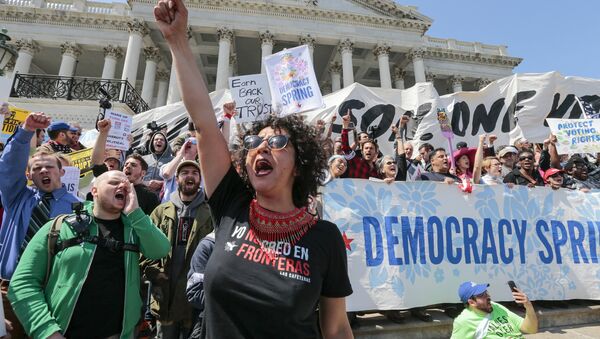 Democrats in the US House of Representatives pledged to hold the lower chamber floor until their Republican counterparts agree to hold a vote on new gun control measures as the sit-in passed the 24-hour mark on Thursday.

"Republican leaders are still blocking us from voting on bills that would help us protect our communities from the tragic cycle of gun violence," Congresswoman Washington state lawmaker Rep. Suzan DelBene stated.

The proposals would expand background checks on individuals purchasing guns and would prevent anyone on the US government’s No-Fly List from purchasing a firearm.

US Dems Stage House Sit-In for Gun Reform - C-SPAN Cuts Live Feed
On Wednesday, Ryan called the demonstration a publicity stunt and added that Republicans will not consider any new laws that would undermine the US citizens’ constitutional right to own firearms.

Earlier in the day, Republicans shut off the House cameras as the body went into recess, forcing lawmakers and the US public cable network C-SPAN to broadcast the sit-in via social media feeds.

Lawmakers in both parties have called for tougher gun control measures in the wake of the June 12 attack in Orlando, Florida, in which US national Omar Mateen shot and killed 49 people and injured 53 others. Mateen pledged allegiance to Daesh terrorist group.