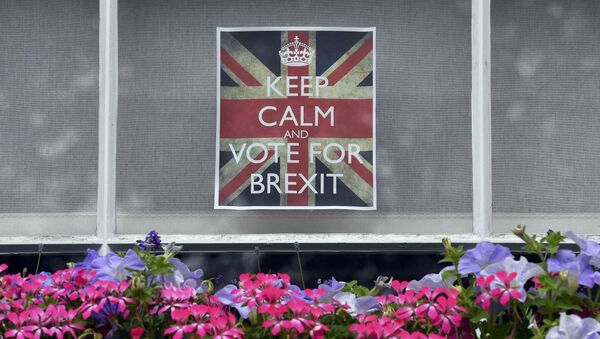 Voters in the Brexit referendum are deeply unsatisfied with both the Leave and Remain campaigns and have doubts even when entering their polling station to vote, a Sputnik correspondent reports Thursday.

LONDON (Sputnik), Anastasia Levchenko — A Sputnik correspondent spoke to a number of voters coming out of the polling station at St. Matthew's Church, London, and every of them said they were deeply disappointed with both campaigns.

'Britain Used to Feel Good on Its Own'

Aslani, 68, voted Out, because he is nostalgic for a time when Britain was better-off and independent.

"I voted Out. I think Britain still can have its independence back. Because now we are still being controlled by the EU and Brussels. Britain used to feel good on its own before," he said.

"There are a lot of intelligent people here. All those with brains come here. And business-wise, all the business world now is in English. So we will be better-off. Hopefully, I am right," he added.

Interestingly, Aslani himself is not of British origin.

"It was important for me to vote today, though I am not British myself, but I've lived in this country since the 1960s, and they have looked after me very well."

Two other voters, a young lady in her 20s, who preferred to remain unnamed, and Dominique, 68, both said they felt tired of the government's lies in the referendum campaigns.

"I voted to remain. I am just very tired of all these lies around," the lady, who wished to remain anonymous, said.

"I voted Out. I wanted to vote Remain initially, but when I heard [David] Cameron telling all this rubbish, I changed my mind. He made such a silly campaign," Dominique said.

We Want to Build 'Bridges, Not Walls'

Two female voters said they voted In for peace and out of the desire not to be in the camp of right-wing fanatics.

"I voted Remain. Because I am Greek, my family is Greek. I want everyone just to try to resolve the situation together. All my friends have voted, most of them voted to stay in. Those few who voted Out, honestly, are racists and uneducated. My family also voted. My dad is hesitating, which is weird, because my mother is Greek," Sophia, 21, said.

Fiona, 40, said that she voted "In" as she wanted the countries in the region to cooperate, not to build walls, but argued that both campaigns were horrible.

"I voted to remain, because it's important for me to be part of it [the EU]. I want to build bridges, and not walls. But both campaigns were horrible, they was so much mud-slinging. It was very important for me to come here today and vote. I think it would be insanity to leave."

Some voters admitted they had doubts even after casting their ballots.

"I voted to stay In, unwillingly. Because I have certain reservations, but the only reason for me to vote Remain is that the people who are for leaving are so awful right-wing racists, that I did not want to be on their side. But in my heart of hearts, I have doubts. I think big businesses like the free movement of labour. But I have concerns of workers rights in this context," Suzanne, 58, said.

Suzanne suggested that the decision could have been made by the elected government rather than by people.

However, asked whether she trusts her government enough to let it make such a decision, she said: "No, not at all."