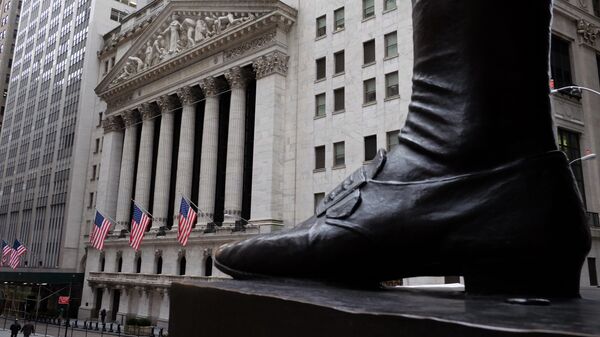 © AFP 2023 / JEWEL SAMAD
Subscribe
International
India
Africa
US Federal Reserve Chair Janet Yellen said during her Congress testimony the aggressively ultra-accommodative policy of negative base rates is a possibility, thus confirming the fears of a dramatic slowdown or recession in the economy, having later provided mixed remarks on broader policy measures.

Kristian Rouz – With the economy poised to slow to an annualized growth rate of 1.8–2.0 percent in 2016 from 2.2 percent last year, Federal Reserve Chair Janet Yellen said during her first day of testimony before Congress she wouldn’t rule out the possibility of a negative base interest rates regime being implemented in the US. The move could be undertaken as a recession-aversion measure; in a similar fashion the European Central Bank (ECB) and Bank of Japan (BoJ) are using negative rates in an attempt to spur domestic lending, inflation, exports and consumption.

Confidence in US Economy Dips Amid Presidential Election Campaign Turmoil
However, with the Fed previously having discussed four hikes in interest rates during this year, later revised the planning down to just one or two hikes, the speculation of negative rates in the US might indicate the regulator sees pessimistic trends prevailing in the economy, given their “data-dependent” approach to policy.

The first day of Yellen’s Congress testimony provided an alarming sign of a possible recession looming indeed in the US, as widely speculated previously based on the fact the corporate earnings have been dismal since mid-2015, and manufacturing declining. Adding to such allegations, the Fed Chair made a sudden statement regarding negative base interest rates, commonly regarded as a crisis-aversion measure of last resort.

“We do have legal basis to pursue negative rates,” Yellen said, having added later, however, that such a move is “not something that’s on our list,” and emphasized that “it is not something we are considering” or “actively looking at.”

The Federal Reserve started its tightening cycle aimed at normalization of monetary policy in late 2013, abandoned its QE by late 2014, and undertook a first in eight year hike in interest rates in December 2015. Nevertheless, as US growth dramatically braked in 1Q16, further raises in interest rates have become problematic. Amidst the lingering gloom in corporate and industrial sectors, hikes in borrowing costs would inevitably trigger a sudden economic recession, yet, even under the current regime of 0.25-0.5 percent base rates a recession is a possibility.

“It is important not to overreact to one or two reports, and several other timely indicators of labor market conditions still look favorable,” Yellen referred to the recent bunch of disappointing macroeconomic data in her testimony before Congress. “The latest readings on the labor market and the weak pace of investment illustrate one downside risk — that domestic demand might falter,” she said.

Obama: Americans to Choose Between 2 Visions of US Economy in Election
Meanwhile, the Federal Reserve submitted a separate report to Congress, saying that despite US financial markets have stabilized after the major turbulence in December through February, stocks and bonds are still overexposed to the risks potentially resulting from Brexit. The UK might vote to leave the European Union on 23 June.

Yellen’s testimony has provided a handful of controversial signals to market participants thus far. The Fed chair has not provided any particular schedule on further policy moves, having noted high uncertainty, neither did Yellen decisively confirmed or denied the allegations of a possible recession and negative rates. After making her NIRP remarks, she noted that should the US economy be hit by a shock, the regulator would rely “on tools it has already used.”