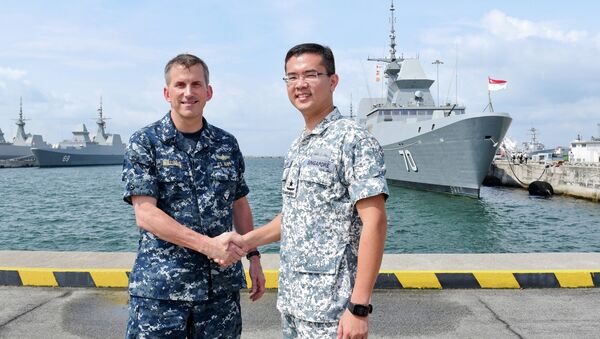 © AFP 2021 / STEFANUS IAN
Subscribe
Thai and US naval and amphibious forces completed their annual Cooperation Afloat Readiness and Training (CARAT) exercise at the Royal Thai Navy Base in Sattahip, the US Navy said in release on Wednesday.

WASHINGTON (Sputnik) — CARAT is a series of bilateral naval exercises between the US Navy and Marine Corps and the armed forces of Bangladesh, Brunei, Cambodia, Indonesia, Malaysia, Singapore, Thailand, Timor-Leste and the Philippines, according to the US Navy.

"We live and work in a diverse maritime environment and working together during exercises like CARAT prepares our armed forces to work jointly during real-world," US Navy Destroyer Squadron 7 commodore H.B. Le stated.

The two militaries also performed an amphibious landing departing from the US landing dock ship Ashland. As part of the exercise, they secured a beach and conducted security sweeps on structures located nearby as well as trained in jungle warfare tactics and noncombatant evacuation operations.