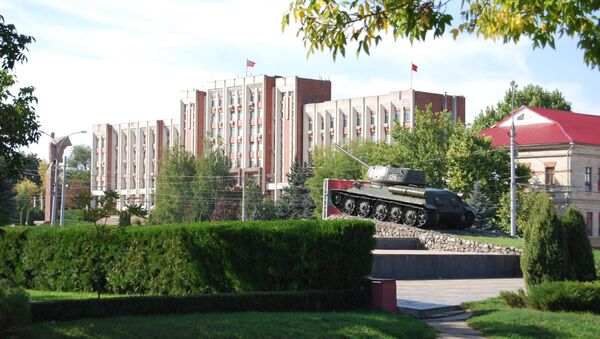 © Flickr / Dieter Zirnig
Subscribe
The Transnistria parliament adopted on Wednesday a law on the framework of negotiations with Moldova, the parliament's press service said in a statement.

TIRASPOL (Moldova), (Sputnik) — Under the legislation, the negotiation process must be conducted to reach a settlement and normalize bilateral relations and rest on the principals of mutual respect for sovereignty and independence, neighborly relations, as well as the maintenance of peace and stability in the region.

"Lawmakers voted to adopt draft law 'On the legal, institutional and political framework for negotiations with the Republic of Moldova' in the first reading without excessive debate," the statement reads.

According to the law, the 5+2 format is a supportive format to the Moldovan settlement negotiation process.

OSCE Chair Steinmeier Lauds ‘Milestone’ Talks on Transnistria Status
Transnistria, a region with a predominantly Russian and Ukrainian population, broke away from the Soviet Republic of Moldova in 1990, fearing the country might seek to reunify with neighboring Romania. The move triggered a war which ended in a ceasefire in July 1992, but the conflict has remained unresolved.

The 5+2 format negotiators include Russia, Moldova, Transnistria, Ukraine, the Organization for Security and Co-operation in Europe (OSCE) and observers from the European Union and the United States.