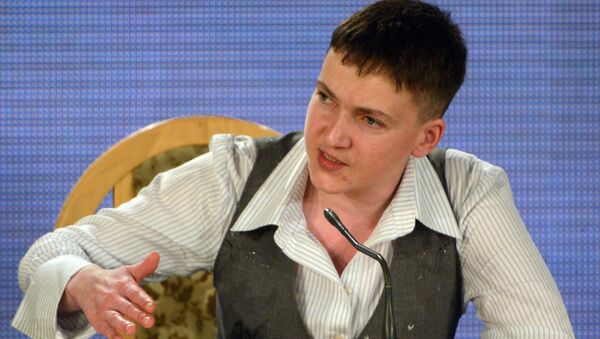 © Sputnik / Alexey Vovk
/
Go to the photo bank
Subscribe
Ukrainian lawmaker Nadezhda Savchenko said that she supports dialogue with Russia and is in favor of the European Union's economic sanctions against the country being gradually lifted.

Ukraine Launches Petition to Appoint Savchenko as Ambassador to Russia
MOSCOW (Sputnik) — In May, Russian President Vladimir Putin signed a decree to pardon Savchenko. She was delivered to Kiev following the pardoning.

On the same day, a plane carrying Yevgeny Yerofeyev and Alexander Alexandrov, Russian citizens convicted and sentenced in Ukraine for terrorism-related activities landed at Moscow’s Vnukovo International Airport, after Ukrainian President Petro Poroshenko signed a corresponding decree to pardon them.

"Europe and the whole civilized world should talk to Russia in the language of economics and politics… I do not like the fact that ordinary people are suffering from it [sanctions] in Russia, Europe and Ukraine… The sanctions should become more personal. Economic sanctions should be gradually lifted," Savchenko, who was convicted in Russia of being an accomplice to the murder of two journalists in Donbass and pardoned by Putin, told the German newspaper Deutsche Welle on Tuesday.