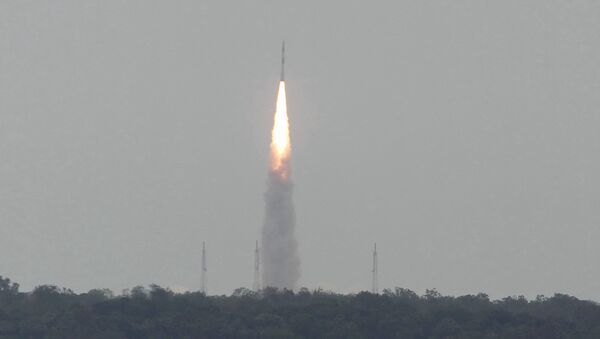 India has launched a record 20 satellites from its Satish Dhawan space center on the Sriharikota island off eastern coast, the national space agency said early Wednesday.

Kiran Kumar, head of the Indian Space Research Organization (ISRO), congratulated all the scientists associated with the project on the successful launch.

"I would like to congratulate the ISRO team for the successful launch of PSLV C-34. All the five stages have been successful," Kumar said.

20 satellites in a go! @isro continues to break new barriers. Hearty congratulations to our scientists on the monumental accomplishment.

​According to the Indian leader, over the years, his country has developed "expertise and capability to help other nations in their space initiatives."

A picture of joy! This is a photo I took, while seeing on TV the success of ISRO in launching 20 satellites in a go. Today is a proud day for India and we congratulate our scientists on this monumental accomplishment. We are proud of how our space programme has transformed people's lives and also helped other nations in their space programmes. I was delighted that children from institutions in Pune and Chennai played a role in making of the satellites. More power to our scientists and youngsters. #TransformingIndia

Dr. Ajay Lele, Senior Fellow at the Institute of Defense Studies and Analysis, told Sputnik that the launch is a "landmark achievement of ISRO" since there are few countries who have achieved the distinction of launching many satellites in one go.

"This is significant mission for India because they have launched 20 satellites in a single mission," Lele said.

The academic noted that some of the satellites were launched for Indian universities, which indicates that India’s next generation is getting ready for the satellite business.

"So this has both social as well as economic connotations," Lele concluded.

It is not the first time that ISRO has put multiple satellites into the orbit in a single launch. It launched 10 satellites at once in 2008.

#ISRO Launch of record 20 satellites is yet another indicator of India's growing space prowess. Congratulations to @isro & our scientists.

Congratulations to “pride of India” @isro & its team for creating history with successful launch of PSLV-C34 carrying record 20 satellites.

A day of great pride for India as #ISRO successfully launches PSLV C-34 placing a record of 20 satellites in space. pic.twitter.com/39Dn3v2p7A

The world record for placing the highest number of satellites belongs to Russia, which put a total of 37 satellites atop a Dnepr rocket in 2014.