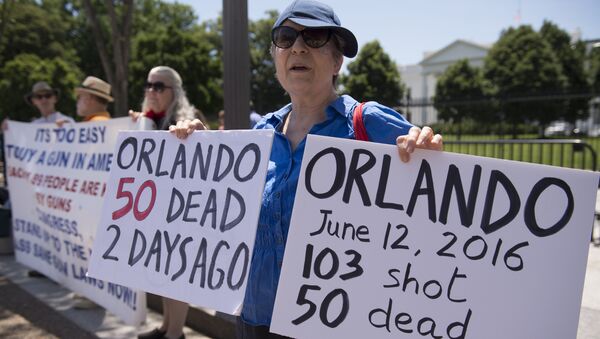 WASHINGTON (Sputnik), Leandra Bernstein — Early on Wednesday, Democratic congressmen staged a sit-in protest on the House floor demanding Republicans call a vote on legislation to keep guns out of the hands of suspected terrorists, and more extensive background checks on gun owners.

US Republicans Reject Gun Reform Despite Support From Most Americans

"We are standing in solidarity with the legislators that are calling for a vote [on gun legislation]," Virginia chapter leader of Mom’s Demand Action gun control group said on Wednesday.

By Wednesday evening, a group of more than 50 protestors were outside the Capitol demanding action to end gun violence in the United States.

"We have a rising body count on our hands," Herrera said of the millions of US gun deaths every year. "This is not a partisan issue, this is one that affects every community in our country."

According to recent polling data, approximately 90 percent of US citizens support more extensive background checks for gun owners. The favorability of gun control measures spiked following the deadly June 12 terrorist attack in Orlando, Florida, when 49 people were killed by a gunman who pledged allegiance to Daesh.