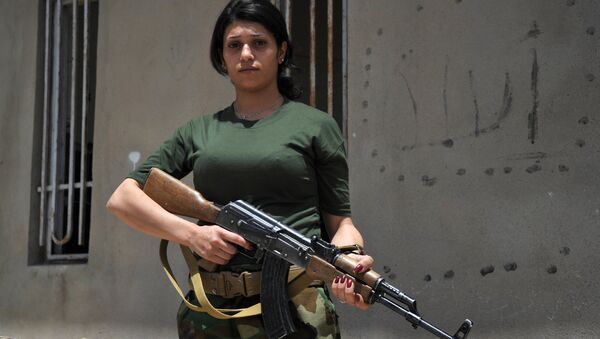 In Iraq slowly but surely the offensive on Mosul continues as the Iraqi forces are trying to liberate the second largest city from the grips of Daesh. At the forefront, along with men, women are fighting the terrorists fiercely. A correspondent of RIA Novosti met with some of these women.

It is said that the self-proclaimed Caliph of Daesh, Abu Bakr al-Baghdadi, was forced to issue a special fatwa “allowing” jihadists to be killed by women. Prior to that, Daesh militants believed that if they die at the hands of “the weaker sex” they will not go to heaven.

Female volunteer fighters in Iraq and Syria fight really well, so the Daesh leader had no choice but to adjust his own ideology, to bring back the enthusiasm to the militants.

“But still the militants are afraid of us by instinct, it is undignified for a brave warrior to be killed by a woman's bullet, as they consider women as second-class citizens,”  24-year-old Hasiba Nouzad, a Turkish Kurdish woman by birth, told RIA Novosti.

Currently, she is a commander of the women's division squad called Hezi-Agri (The Power of Fire).

“Two years ago I saw on TV and online what Daesh is doing in Sinjar (Yazidi town under Daesh). I cried a lot as it really moved me and I decided that my place is here. I have to fight to protect my people,” Hasiba said.

Alas her husband did not share her enthusiasm and decided to move to Germany like many other refugees. However, the couple is in touch and talk on Skype.

In May, Peshmerga fighters were faced with a fierce battle with Daesh as the terrorists broke into Telskhov village which has been under control of the Kurds for the past one year.

About 400 terrorists broke into the village but the Kurds quickly managed to pull a large group together calling for reinforcements. They were assisted by the US Special Forces and aviation.

Haseeba is not angry with her husband as she said, “Of course, with him it would have been easier for me, but it's his choice, he told me that he does not want to fight.

“Whether I'll go back to him? I do not know, because I do not know for how long I will fight. First we destroy Daesh and then we shall see,” Hasiba said.

Revenge for the Loved Ones

Asima Dahar is a Yazidi girl who has joined the ranks to fight against the militants who captured her loved ones and took them prisoners.

“Militants killed my uncle, my cousin and brother was captured. Their fate exactly is unknown to me; it seems that my brother has to work on some of the most difficult jobs at the hands of the militants,” Asima said.

Security Council: Kurdish Troops Retake 9 Villages From Daesh East of Mosul
Sometimes she gets text messages from unknown numbers which seem to be from her relatives that were taken prisoners. They use someone else’s phone to get in touch.

“The worst thing is that all of our Sunni neighbors with whom for centuries we lived side by side, always trusting and helping each other turned to Daesh and became their supporters.”

“One day they came for our property and our lives. They said… Now it is our power and you are an infidel. We must adhere to the caliphate and do as they say; otherwise they will kill us too. They took my family and it was the people we knew,” Asima Dahar recalled through tears.

The fighters of the Kurdistan Workers' Party (PKK) of Abdullah Ocalan enjoy a reputation in the Middle East of being the bravest fighters. Now the PKK is fighting on two fronts, against Daesh and the Turkish army.

Life as a PKK member is extremely tough; they have no personal belongings, except arms and underwear. The PKK have a ban on alcohol and loving relationships as the guerrillas must direct all their energy towards war and political education.

Almost half of the PKK fighters are women. Imposing such restrictions by the founders of the PKK, are aimed at preventing any “confusion and vacillation” and moral decay, inevitable for a mixed group.

Turkish Forces Kill Some 7,600 PKK Militants Since July 2015
It is surprising, that within the ranks of the PKK there are very young girls. Near the Kirkuk province, the RIA correspondent and his team met two nice guerrilla fighters. One was 20-year-old Dieren and the other was 19-year-old Evie, both are from Turkish Kurdistan. Both the girls wanted to avenge the Turkish government so they joined the Kurdistan Workers' Party.

“My whole family for several generations has been a part of the PKK. That is why I decided to join the party, I was not forced though, Dieren said. “Our country, Kurdistan, has been occupied by Turkey so we have to fight for its independence,” she further said.

She added that she does not care whether the fighting is in Turkey or in Iraq because either way she is fighting for the future of Kurdistan and its “independence and for the people’s freedom.”

Dieren said that in two years of war with Daesh she has killed 8 or 10 militants. “More precisely I cannot say, because when there is a fight, everyone shoots because it is a battle. Did I hit a terrorist or some of my comrades, did I kill them or wounded them, that is hard to say.”

“We are fighting against Daesh as the world's evil, against subjugation which it carries for women and for the Kurds,” the young fighter concluded.