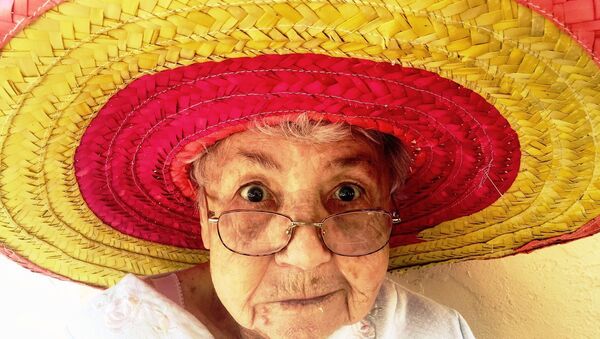 US Presidential hopeful Donald Trump is not a man renowned for self-deprecating humour, so he's unlikely to see the funny side of a Mexican flag, now flying just outside his controversial Scottish golf course.

Some legend raised a Mexican flag on the border of Trump's golf course in Aberdeen. I love Scotland, so very much. pic.twitter.com/UW3FGVxkmE

Donald Trump inspired widespread controversy with his proposition to build a wall along the US-Mexico border, at an estimated cost of $5-10 billion funded by the Mexican government.

The stunt falls just days before Trump is due to arrive in Scotland to inspect his new Trump Turnberry Resort on the west coast — and event for which numerous protests are already planned.

The multi-billionaire property tycoon, and Republican US Presidential candidate, has a history of getting litigious where the locals have done anything to "spoil the view" at his Aberdeenshire Golf Course. Initially, it was Michael Forbes — a farmer who refused to sell his land to Trump.

Michael Forbes, who opposed Donald Trump's plan to build a golf course on his family's land. 'Top Scot' in 2012. pic.twitter.com/VfM2aus3qe

Forbes was offered a payment of USD$664,500 in addition to a salary of USD$74,000 for an unspecified job, but the farmer said he would "never sell", and painted the words "NO GOLF COURSE" on the side of one of his sheds.

Mr Trump said of Michael Forbes: "[he] is not a man that people in Scotland should be proud of, he is not somebody that they should be talking about.  Mr Forbes is not a respected man among the people that he lives with… Mr Forbes lives in a pig-like atmosphere, it's disgusting!"

@kimula1957 Farmer/fisherman- Michael Forbes was awarded Scotsman of the year for standing up to Trump. #NeverTrump pic.twitter.com/D2gF41bSLv

Despite those protestations, however, Forbes still occupies the land and has subsequently been awarded 'Scotsman of the Year' at the Spirit of Scotland Awards.

Trump also mounted a legal case against the Scottish Government, following its decision to build a windfarm off the coast of his Aberdeenshire golf course, claiming it would "spoil the view".

@SethMacFarlane Trump at protest in Scotland as he tried to oppose Wind farm@of his golf course. Go Scotland! pic.twitter.com/NEl1jP25ba

He added that the plans demonstrated a "small-minded and parochial mentality which dominates the current Scottish government's dangerous experiment with wind energy".

The case was unsuccessful and the wind farms are due to go ahead, although Mr Trump has vowed to continue fighting it.

On this day in 2025 President Trump threatens to nuke China for building a solar windfarm near his moon golf resort. pic.twitter.com/rIBMEyE61o

Thus far, Trump has not commented on the presence of the Mexican flag outside Trump International Golf Links, Scotland.