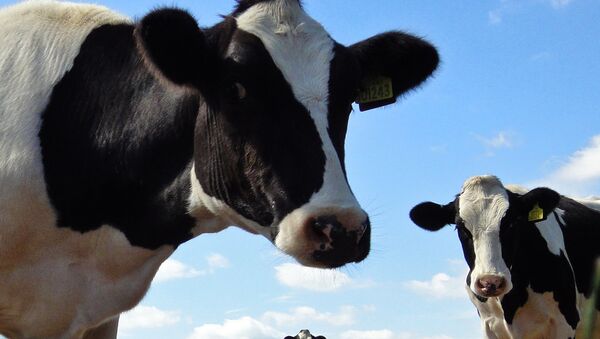 © Flickr / Dave Wild
Subscribe
A cow en route to a Maine slaughterhouse made a daring escape for her freedom by escaping from the back of a trailer, but was shot and killed by police shortly after.

Idaho’s Ag-Gag Law Curbing Agricultural Investigations Struck Down
On Monday morning the cow, in transit to the slaughterhouse from Harvest Hill Farms in Mechanic Falls, kicked open the doors to her trailer and made a mad dash into traffic.

The animal ultimately ended up at a gas and welding supply company, where police stated that it was hard to find a safe space to execute her.

"While there, it knocked over a couple of cylinders," Deputy Chief Jason Moen told the Sun Journal. "And based upon the condition of the cow, the area, the danger associated with it, the owner requested us to put the cow down."

"It took us a little while to set up a safe shooting solution because of Maine Oxy and the flammable gases they have there, but once we got that established, it took about 10 to 15 rounds to put the cow down because it was so adrenalined and crazy."

The cow was apparently sent to the slaughterhouse because she could not breed, making her useless in the eyes of the farm where she was held.

"The reason why she acted like she did, I'm sure, is because she jumped out of the back of a moving trailer," the driver of the truck told the local newspaper. "She turned mean when there was 30 guys trying to corral her, all those tanks. She was out of her element, totally, and it just made her real crazy. But she was perfectly healthy and I would have perfectly ate her."