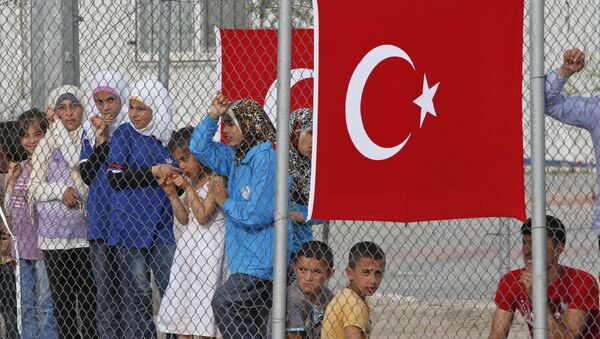 © AP Photo / Lefteris Pitarakis
Subscribe
Delays in registration and limited implementation of temporary protection policies in Turkey mean that many Syrian refugees are left without effective protection or access to jobs and services that they desperately need, Human Rights Watch has said.

The European Commission is negotiating a deal under which "irregular migrants" — those not granted asylum — arriving in Greece after March 20, 2016, are relocated back to Turkey, in return — on a one-for-one basis — for Syrian refugees in Turkey being relocated to EU member states.

However, the UN refugee agency UNHCR, Médecins Sans Frontières, the International Rescue Committee, the Norwegian Refugee Council, Save the Children and Red Cross — have said the EU-Turkey deal is either immoral or illegal as the 'hotspots' where migrants are processed have become detention centers. They also say Turkey is not a 'safe country' for migrants to be returned to, under the Geneva Convention.

​In a damning report, Human Rights Watch says the laws and policies governing Syrian refugees' lives in Turkey, however, do not grant them full refugee rights, and the protections these laws and policies do extend have yet to be fully realized. As a result, many Syrians in Turkey still cannot access education, health care, and lawful employment. Furthermore, delays of up to six months in registration for temporary protection mean that some refugees are unable to get basic services and live in fear of being forced to live in a camp or deported.

"As Turkey is host to over two million Syrian refugees it is hardly surprising that many are not getting the support they desperately need to maintain livelihoods. The EU is morally, and indeed legally, obliged to share some of the refugee burden by not sending Syrian refugees back to Turkey without assessing their asylum claims," said Stephanie Gee, fellow in the refugee rights program at Human Rights Watch.

One 21-year-old Syrian man said he went five times to two different police stations before he was even able to make an appointment — for a date three months later — to apply for registration. Others said officials imposed requirements for registration that were not specified in the regulation, such as a rental agreement with a landlord.

​Ali, 21, said that registering for temporary protection in Istanbul was a months-long ordeal. "I went to the police station in Fatih [a neighborhood of Istanbul] last October to get the kimlik. It was so crowded, they told me to come back the next day. I did, waited for hours, and still didn't get an appointment."

​Rama, 19, said she paid a broker to facilitate her registration process because she was pregnant and otherwise might have needed to pay even more exorbitant amounts for crucial neonatal and maternal care during her pregnancy and delivery.