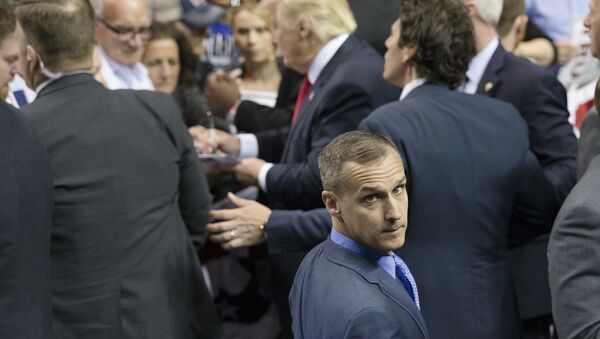 Corey Lewandowski, the controversial campaign manager of presumptive Republican presidential nominee Donald Trump, has been fired as the candidate continues his pivot to the general election.

World
Trump's No Fool: Hillary's American Empire is the Real Danger
Throughout the primary campaign, Lewandowski encouraged Trump’s anti-political correctness. While this strategy worked for the party’s base, many political strategists have argued that the billionaire will have to tone down his rhetoric in order to achieve broader appeal in a general election.

“The Donald J. Trump Campaign for President, which has set a historic record in the Republican primary having received almost 14 million votes, has today announced that Corey Lewandowski will no longer be working with the campaign,” campaign spokeswoman Hope Hicks said in a statement.

“The campaign is grateful to Corey for his hard work and dedication and we wish him the best in the future.”

Lewandowski had never worked on a national campaign prior to working with Trump, and had developed a rather hostile relationship with the media, others within the campaign, and members of the Republican National Committee.

Trump’s Fight With US Media Could Hurt Outreach Strategy

Fox News has cited unnamed sources within the campaign who claim his firing came down to an ultimatum presented by Campaign Chairman Paul Manafort, giving Trump 48 hours to choose between Lewandowski or Manafort. Even Trump’s children reportedly weighed in, arguing that Manafort was better poised to guide the billionaire through the general.

“Paul Manafort has been in operational control of the campaign since April 7, that’s a fact,” Lewandowski told Fox News when asked for comment.

In subsequent television interviews he has repeatedly maintained that he does not know why he was fired, and that he would not change a single thing he did during his time with the campaign.

It is said that Manafort will be assuming Lewandowski’s role, meaning, sadly, there will be no televised ‘Apprentice’-style search for his replacement.