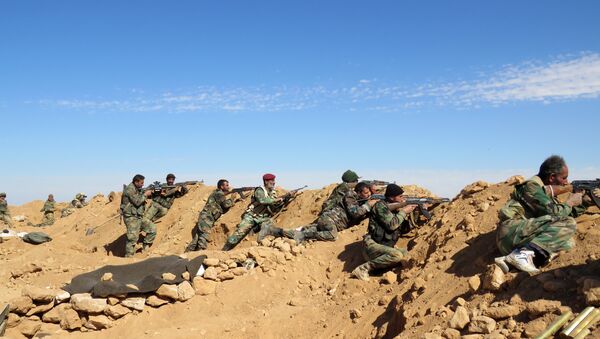 © AFP 2021 / STRINGER
Subscribe
The Syrian government troops are fighting Daesh over an oil field near Tabqa in the west of Raqqa province, a source in Syrian militia told RIA Novosti on Monday.

Russian Jets Crush Daesh-Controlled Oil Facilities Near Syria's Raqqa
BEIRUT (Sputnik) — Since May, the Syrian army launched an offensive in the direction of Tabqa, which lies on the way to the city of Raqqa, the Syrian stronghold of the islamists, outlawed in many countries worldwide, including Russia and the United States.

"Fierce fighting near the oil field still continue. At night, parts of the Syrian army drove terrorists out of Ash Shola, but an intensive counterstrike forced them to regroup in the morning. The field is not yet completely liberated," the source said.