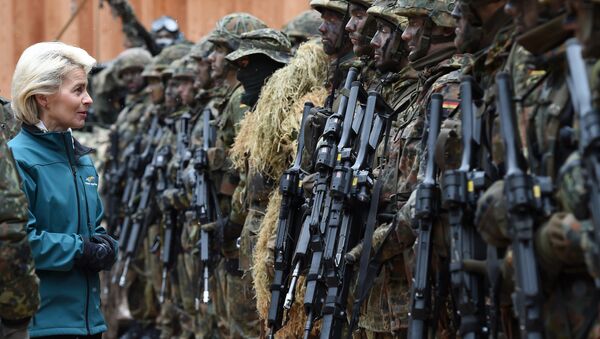 © AFP 2023 / CHRISTOF STACHE
Subscribe
International
India
Africa
German soldiers do not trust weapons they are using, a poll conducted by the Center for Military History and Social Studies of Bundeswehr (German armed forces) said as quoted by local media.

The poll showed that only eight percent of the German soldiers polled fully trusted in their personal weapons. A total of 28 percent said they partly trust their arms. At the same a total of 43 percent of respondents said they did not trust their weapons.

Security Services Say 29 Germany's Ex-Soldiers Left for Syria, Iraq
The survey also said that 36 percent of German soldiers did not trust weapons of their units while 51 percent said they are rather or partly confident in their units’ equipment.

In January, Parliamentary Commissioner for the Armed Forces Hans-Peter Bartels said that the advanced weaponry supply process was delayed, insufficient in volume and more expensive than planned.