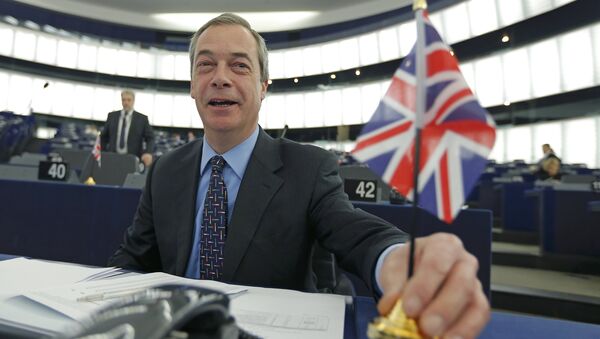 The EU future is "doomed" even if London remains in the 28-bloc at the upcoming referendum on June, 23.

In Case of Brexit, UK to Be Allowed to Return on ‘Unacceptable’ Terms
MOSCOW (Sputnik) — The future of the European Union is "doomed" even if country's nationals support London remaining in the 28-bloc at the upcoming referendum, United Kingdom Independence Party (UKIP) leader Nigel Farage said Monday.

"If this proposition gets rejected, then we will not be the first country to leave the European Union… The Danes, or the Swedes or the Dutch will beat us to it. Believe me, this project is doomed," Farage told the BBC, answering a question about the future of the European Union if UK voters decide to stay in the bloc.

At the same time, Farage added that he hoped the voters would choose to end London's membership in the European Union.

On Thursday, the United Kingdom prepares to vote in a referendum on whether it should stay in or leave the European Union. The referendum was scheduled after UK Prime Minister David Cameron and the leaders of the 27 EU member states agreed in February to grant the United Kingdom a special status within the bloc.