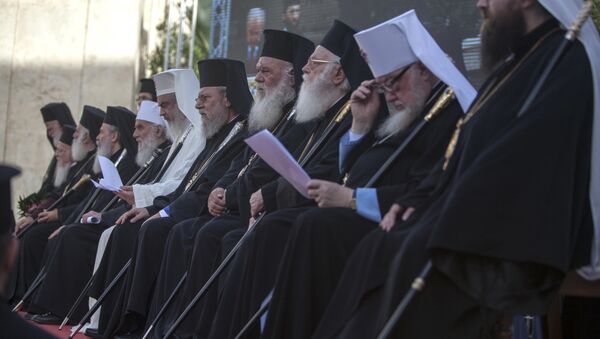 © AP Photo / Sean Hawkey/Holy and Great Council
Subscribe
Organizers of the Pan-Orthodox Council in Crete still hope that the four missing churches will turn up at the last moment, a representative of the Constantinople Patriarchate told Sputnik.

Pan-Orthodox Council Cannot Be Altered Without Consensus - Archbishop
KOLYMVARI (Crete) (Sputnik) – The Churches of Antioch, Bulgaria, Georgia and Russia have refused to take part in the historic council after disputes about the agenda.

"It is sad that some churches have not arrived, and still we hope that they will come to take part in discussions. The council is a forum where various issues that have not yet been raised can be discussed," Archbishop Job of Telmessos, who represents the Ecumenical Patriarchate of Constantinople, said.

The Archbishop stressed that only the four churches were responsible for their decision to skip the council as it had been called unanimously by all branches of Orthodoxy.

"The council was called unanimously. If some churches later decide to skip it, they bear the responsibility for their absence. They cannot force other churches not shun the council," Job of Telmessos said.

The history of Orthodoxy has seen many instances of councils gathering in the absence of some churches, he noted, stressing that post-council processes will be important.

The Archbishop also denied accusations that the Istanbul-based Ecumenical Patriarchate was trying to force its will on other churches of the Eastern Orthodoxy.

"I totally disagree. I watched every step of [preparations]. I saw how invitations were sent out and how the organizing committee took effort to response to every organizational issue that was raised," he stressed.

Orthodox churches intending to take part in the upcoming Pan-Orthodox Council in Crete have once again invited the four churches abstaining from attendance, but the Russian Orthodox Church turned down the invitation, the Constantinople Patriarchate's representative said.

"Church primates attending the [June 17] Synaxis sent a message to the four churches which have not yet arrived. They asked them to come for tomorrow's service [joint liturgy] and stay for the council…So a the invitation was repeated once again. Today, as far as I know, the Patriarch of Moscow and all Russia Kirill turned the invitation down and said he will not come," Archbishop Job of Telmessos said.