Trump More Likely Than Clinton to Embrace Cooperation With Russia 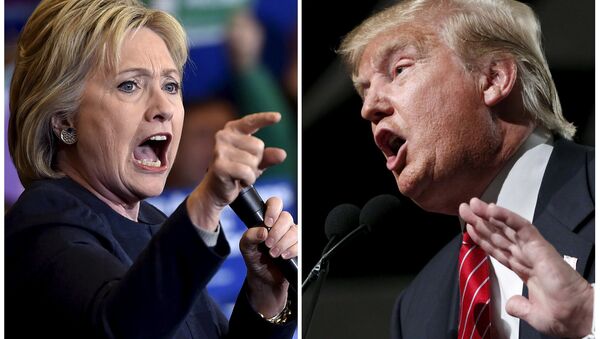 © REUTERS / David Becker/Nancy Wiechec
Subscribe
International
India
Africa
According to the poll, US Republican presidential candidate Donald Trump may take steps to improve relations and cooperation with Russia, but his Democratic rival Hillary Clinton will not.

Trump Could be Sued Over Unilateral Muslim Ban if Elected President
WASHINGTON (Sputnik) — Presumptive US Republican presidential candidate Donald Trump may prove willing to take up Russian President Vladimir Putin’s offer of improved relations and cooperation with Russia, but his Democratic rival Hillary Clinton will not, US analysts told Sputnik.

On Friday, Putin welcomed Trump’s words on willingness to restore Moscow-Washington relations. He also expressed hope that the sense of responsibility would urge next US president to cooperate with Russia.

"It would be well if President Putin got his wish and a spirit of cooperation with Russia was born," US scientist and political commentator John V. Walsh said. "But how could that happen? There is a simple answer. It will not happen if Hillary Clinton becomes president of the United States."

Walsh described Clinton as "essentially a neocon" [neo-conservative] with a proven track record of bellicosity toward other countries way back to the presidency of her husband Bill Clinton in the 1990s.

Clinton, Walsh predicted, "will push Europe ever closer to military confrontation with Russia while the United States remains safely an ocean away. The consequence for Europe — and Russia — can be seen by looking at Ukraine today."

Trump and Clinton Call for More Bombs in the Wake of Orlando Attack
Trump, if elected, would also face strong pressures to try and make him confront Russia, Walsh acknowledged. But, he might be able to resist those forces and improve prospects for peace.

"If Donald Trump, nemesis of the neocons, becomes US president and if he can resist the enormous pressure from the neocons and the military-industrial-congressional complex, there is a chance for peace and security, development and prosperity… But right now that is the only chance," Walsh observed.

US author and veteran foreign affairs analyst Joe Lauria said that whoever was elected, the next US president had to reverse Washington’s current policy of provocation and potential aggression against Russia if the two nations were to have a mutually beneficial partnership.

"The new president must renounce the coup the United States helped orchestrate in Kiev, force its leaders to cease military operations and implement the Minsk accords [and] recognize the loss of Crimea to Russia," Lauria stated.

Crimea rejoining Russia was a consequence of Washington backing the coup against democratically-elected Ukrainian President Viktor Yanukovych, he said.

Seven Point Lead: Clinton Gains Ground in a Match-Up Against Trump
Clinton or Trump would also have to call off all NATO war games near Russia's borders, lift sanctions against Russia, dismantle the missile shield just installed in Romania, call off the one planned in Poland and cease all anti-Russian propaganda, Lauria insisted.

However, "a blizzard in hell is more likely to happen if Hillary Clinton becomes president and no one knows what Trump would do as he is a complete wildcard," he warned.

Either candidate if elected would present a highly dangerous situation that Russia would have great difficulty diffusing, Lauria commented.

"For the moment, it is in the hands of the American people and those in the United States who claim to be against war. Our very survival may depend on the outcome," he said.

The issue would not be decided until the US presidential election was held on November 8, Walsh concluded.