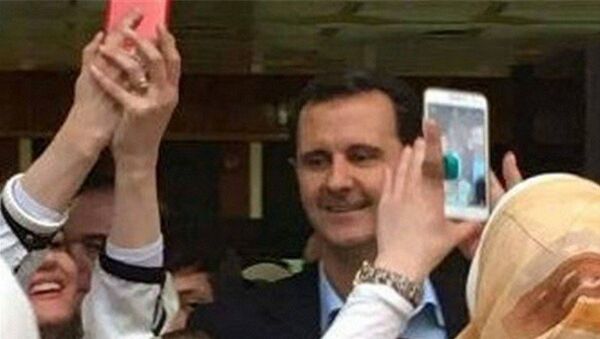 An internal memo on Syria advocating for military strikes against President Bashar Assad's forces, signed by dozens of US diplomats, is a way to force Moscow to cooperate with the US leadership regarding the future of Assad as the Syrian leader, a source in the Syrian opposition told Sputnik Friday.

Kerry Calls Diplomatic Memo Urging War Against Assad 'Important Statement'
MOSCOW (Sputnik) – The internal memo signed by some 50 US diplomats, a draft of which was obtained by The New York Times from a US State Department official on Thursday, calls for "a judicious use of stand-off and air weapons," against Assad forces.

"All these statements are games that we have already seen in the past. This is the way to put pressure on the Russians. They are saying: ‘Look, we have the opposition that demands actions against Assad and calls on the government to change the current political position toward the Syrian regime, so you [the Russians] need to work with us [the current US administration] and we need to move fast’," the source said.

Syria has been mired in civil war since 2011, with government forces loyal to president Assad fighting a number of opposition factions and extremist groups.

On February 27, a US-Russia brokered ceasefire came into force in Syria. Terrorist groups such as Daesh, as well as Jabhat al-Nusra (Nusra Front), both outlawed in Russia and a range of other states, are not part of the deal.

Russia recognizes Assad as the legitimate authority in Syria, stressing that the Syrian people should be free to choose their leadership without outside intervention. The United States and some of its allies have been supporting the so-called moderate Syrian opposition since the beginning of the conflict in Syria, urging Assad to resign.