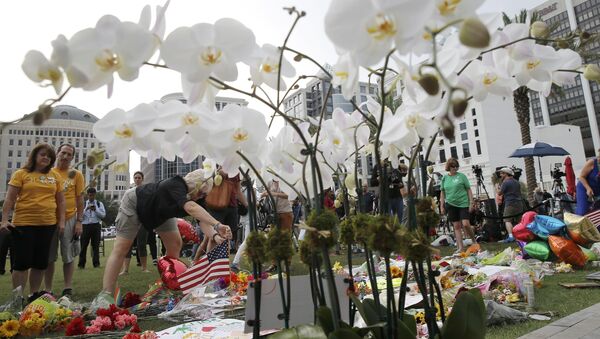 US Democrats May Push for Stricter Gun Control Amid Orlando Shooting
WASHINGTON (Sputnik) — US Republicans tend to view the nightclub shooting in the city of Orlando primarily as an act of Islamic terrorism, while Democrats are more likely to consider the massacre a case of domestic gun violence, a new poll revealed on Friday.

About 79 percent of Republicans surveyed blamed terrorism for the deadly attack, while 60 percent of Democrats blamed the accessibility of guns for the massacre, according to a Gallup poll.

"Democrats' interpretation of the Orlando shooting may be influenced by Democratic leaders' calls for stricter gun laws in recent days," a press release accompanying the poll explained.

US Police-Involved Shooting Takes Place Outside Miami Airport
For those with no party affiliation, 44 percent said the main issue was Islamic terrorism while 42 percent considered the attack primarily a problem of domestic gun violence.

Sunday’s shooting in the US state of Florida by a lone gunman, who pledged loyalty to the so-called Daesh, killed 49 people and injured 53 others.

Both US President Barack Obama and presumptive Democratic presidential nominee Hillary Clinton have called the massacre an act of terrorism.

Obama, however, has refused to label a militant interpretation Islam as the primary source of terrorism, drawing frequent criticism from Republicans who accuse the president of failing to understand the nature of the main terrorist threat facing the United States.