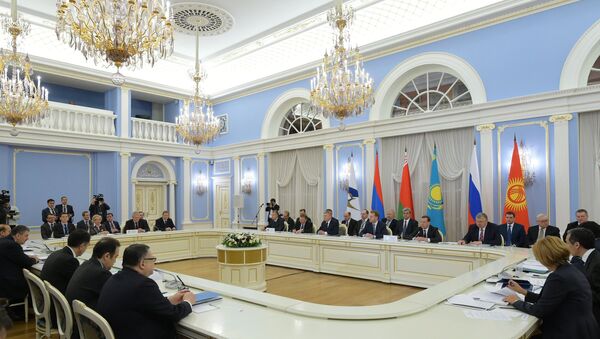 © Sputnik / Alexander Astafyev
/
Go to the photo bank
Subscribe
Executive Secretary of the United Nations Economic Commission for Europe Christian Friis Bach said that a closer integration between the European Union and the Eurasian Economic Union is needed for development and peaceful coexistence of both blocs.

EEU Works on Free Trade Zone With Serbia - Kremlin
ST. PETERSBURG (Sputnik) — A closer integration between the European Union and the Eurasian Economic Union is needed for development and peaceful coexistence of both blocs, Executive Secretary of the United Nations Economic Commission for Europe (UNECE) Christian Friis Bach told Sputnik.

"I do strongly believe that we need more economic integration in Europe and we need an integration between the two big integrations — the European Union and the Eurasian Economic Union,” Bach said.

He noted that the reason for it is that closer cooperation, more trade and more transit and more tourism would be beneficial for the economies of both Unions and because it will be “the only viable pathway to peaceful coexistence.”

"We are now engaging together with the government of Belarus in the process where we will hopefully facilitates dialogue between the different countries and the different unions to create closer cooperation and integration," he said, noting that Minsk has taken an initiative of acting as a bridge between the European Union and the EEU.

"We [UNECE] have to create now a new framework, a new foundation for integrations where we will be open and transparent, and where countries can say we want to be part of or work closer with the European Union and the Eurasian Economic Union. We do not want to choose sides, we do not want to be only part of one or the other, but have transparent and open trade regime that can facilitate growth and peaceful coexistence," Bach said

Christian Friis Bach also noted that EEU should be open for integration of any country that does not want to "choose sides".

"As you know, there are countries in our region that…do not want to choose this side or that side, but want to be part of an open transparent integration. I hope that the EEU will shape its future in a way that will make it open and transparent and reach out to other unions and other countries in the region," Bach said

According to Bach, UNECE works closely with the EEA commission trying to help countries break down barriers between them in order to shape a stronger EEU.

"Eurasian Economic Union is a promising integration effort between some of the countries in the region," the UNECE official added.

Europe Needs Cooperation Instead of New Barriers
Christian Friis Bach also said that the United Nations should serve as a platform for the international talks on economic cooperation, due to its neutral nature.

"I offer the United Nations as a neutral and non-politicized platform to now create a dialogue on how we can strengthen the economic integration. This is very very needed," Bach said.

According to him, "it is the only way forward."

He also encouraged all countries to participate in "Economic Integration in Europe towards 2030," initiated by the UNECE.

000000
Popular comments
What about the ultra liberal globalist ideology that goes with the EU and assumes the exceptionalism of the West's definition of democracy? Does that get left at the EEU's doorstep? The EU is talking about integration with Russia to hide its part in partnering with the US and NATO to keep Europe divided, ironically, on the same day it has just renewed sanctions. Right now the EU will say anything it has to in order to avoid oblivion: words are cheap and its provocative actions tell another story.