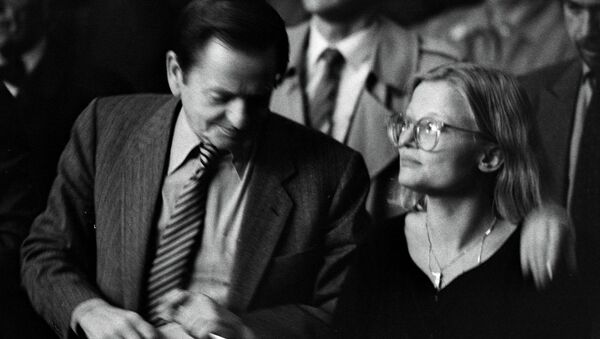 © AFP 2021 / LARS JANSSON / SCANPIX SWEDEN
Subscribe
The murder of British Labor MP Jo Cox amid the ongoing Brexit campaign has plunged both sides of the debate into a deep shock. In Sweden, the brutal killing is a painful reminder of the assassination of Social Democrat politician Anna Lindh in the final straight of the national Eurozone referendum.

UK Labour MP Cox Confirmed Dead After Being Stabbed and Shot
Labour MP Jo Cox died after being shot and stabbed multiple times after a constituency meeting in West Yorkshire. The murder may become a turning point in the Brexit campaign and provide the UK vote on continued EU membership with an unexpected dénouement.

Remarkably, the Swedish vote on the euro in 2003 was tarnished by the murder of then Foreign Minister Anna Lindh of the Social Democrat Party, which was carried out in a similar way and under similar circumstances.

Anna Lindh was stabbed to death on September 13, 2003, in the final stretch of the pro-euro campaign, preceding a referendum on joining the Eurozone. The murderer was a young man named Mijailo Mijailović. Born in Sweden to Serb parents, Mijailović was still troubled by the Yugoslav civil war, where Lindh had definite and anti-nationalist views. Despite the fact that the murder of Anna Lindh never was classified as a political act, Mijailović admitted he felt hatred for all politicians, Swedish and Serbian alike.

Silence of the Swedes: Well-Known Writer Condemns Kingdom's Censorship
As a popular pro-euro politician, Lindh was a spokesperson for pro-euro side and her face was on billboards across Sweden the day she was murdered. Following the attack, all euro-campaigning was immediately cancelled whereas television advertisements were withdrawn.

Despite speculations that common sympathy for Lindh could influence the voting, the euro was rejected in the referendum 55.9 percent against and 42.0 percent in favor.

How the United Kingdom will vote in a week's time is impossible to predict. If murder gets more of Labor supporters to rise up from the sofas and go to the polls, this can possibly tip the scale for the side that wants Britain to remain in the EU, Dagens Nyheter columnist Anna Ström Melin wrote in her opinion piece dedicated to Jo Cox.

"Not only Sweden and the UK, but all the countries that push their citizens into polarizing referendums, should by now have learned which confused and dark forces that can come in motion when people think the nation's honor and future is at stake," she wrote.

The Domino Effect: Swedes Eye Brexit, and Some are Even Inspired
In Sweden, the Cox assassination is reminiscent of yet another high profile political murder. In 1986, the then Prime Minister Olof Palme was assassinated walking home from a cinema with his wife. It was the first of its kind in modern Swedish history, and the first assassination of a national leader since King Gustav III was shot dead in 1792.

Palme had a profound impact on his compatriots' emotions, being particularly popular among the left, but harshly detested by most liberals and conservatives. Known for the aggressive and outspoken debate style, Palme remained a critic of both the United States and the Soviet Union, as well as a fierce advocate of Sweden's non-alignment policy.

30 years ago today we lost Olof Palme. Never to be forgotten. pic.twitter.com/y4PHb9Yxe3

000000
Popular comments
The Swedish Folke Bernadotte, peace negotiator for UN in Palestine and before an organisator for the so called "white busses" releasing Jews from concentration camps, was assassinated by Jews in '48. What is remarkable in this article (below) is the statement from Israeli official who has the opinion (of January 2016) that the Swedish minister of foreign affairs could share the same fate. With such a statement from an Israeli official reveals that respect and obligations to international laws and international relations are not written in the Israeli constitution and therefore the state of Israel is from the very beginning illegal. www.richardsilverstein.com/2016/01/23/former-education-ministry-official-praises-bernadotte-assassin
ptcjm
17 June 2016, 15:45 GMT
000000
It would be worth considering how many representatives for working force political parties have been eliminated the last half a century or so. Apparently here too, there was an opportunity. Such a consideration should not be disregarded.
ptcjm
17 June 2016, 15:56 GMT
000000
Newsfeed
0
New firstOld first
loader
LIVE
Заголовок открываемого материала
Access to the chat has been blocked for violating the rules . You will be able to participate again through:∞. If you do not agree with the blocking, please use the feedback form
The discussion is closed. You can participate in the discussion within 24 hours after the publication of the article.
To participate in the discussion
log in or register
loader
Chats
Заголовок открываемого материала
Worldwide
InternationalEnglishEnglishMundoEspañolSpanish
Europe
DeutschlandDeutschGermanFranceFrançaisFrenchΕλλάδαΕλληνικάGreekItaliaItalianoItalianČeská republikaČeštinaCzechPolskaPolskiPolishСрбиjаСрпскиSerbianLatvijaLatviešuLatvianLietuvaLietuviųLithuanianMoldovaMoldoveneascăMoldavianБеларусьБеларускiBelarusian
Transcaucasia
ԱրմենիաՀայերենArmenianАҧсныАҧсышәалаAbkhazХуссар ИрыстонИронауОssetianსაქართველოქართულიGeorgianAzərbaycanАzərbaycancaAzerbaijani
Middle East
Sputnik عربيArabicArabicTürkiyeTürkçeTurkishSputnik ایرانPersianPersianSputnik افغانستانDariDari
Central Asia
ҚазақстанҚазақ тіліKazakhКыргызстанКыргызчаKyrgyzOʻzbekistonЎзбекчаUzbekТоҷикистонТоҷикӣTajik
East & Southeast Asia
Việt NamTiếng ViệtVietnamese日本日本語Japanese俄罗斯卫星通讯社中文（简体）Chinese (simplified)俄罗斯卫星通讯社中文（繁体）Chinese (traditional)
South America
BrasilPortuguêsPortuguese
NewsfeedBreaking
01:00 GMTWall Street Up Broadly as Fed Signals Caution With US Stimulus Taper, Rate Hike
00:45 GMT‘This Moment Demands Action’: Biden Eyes Executive Actions After Fruitless Police Reform Talks
00:26 GMTMoroccan Liberal Parties Form Coalition Government, Ousting Islamists After Decade of Rule
00:00 GMTIAEA Must Have Access to Nuclear Fuel for Australian Submarines - Iranian Envoy
YesterdayFDA Authorizes Pfizer Booster Shots for Elderly, At-Risk Americans
YesterdayTurkey Should Withdraw From Syria, End Occupation of Territories - Syrian Foreign Minister
YesterdayPentagon Says Aware of Reports of Poor Conditions at Military Base Housing Afghans
YesterdayUK Announces Plans to Become AI Innovation Superpower Within 10 Years
YesterdayUS Man Pleads Not Guilty to Capitol Bomb Threat After Livestreaming Police Standoff
YesterdayCroatian Police Partially Solve Mystery of Lone Woman Found on Island With No Memory
Yesterday‘Earth Looks Fragile from Space:’ Jeff Bezos Pledges $1 Billion to Tackle Climate Crisis
Yesterday‘World’s Coolest Dictator’: El Salvador’s Bukele Changes Branding on Twitter Amid Protests
YesterdayCzech, Hungarian Prime Ministers Slam EU for Poor Border Protection From Illegal Migrants
Yesterday‘We’re Done With Fear’: Florida Appoints Joseph Ladapo as State’s New Surgeon General
Yesterday'Difficult Decision': Facebook Chief Technology Officer to Step Down From Post
YesterdayGrandmothers Know Best: Cristiano Ronaldo’s Mother Believes Her Grandson is a Star in the Making
YesterdayStates to Provide Cash for Each COVID Death: Modi Gov't to Top Court
YesterdayLeaks Reveal UK Equalities Minister Dismissed Colonialism, Mocked Trans People
Yesterday'Mars' Fate Was Decided From Beginning': Study Reveals What Likely Happened to Red Planet’ Water
YesterdayNo Political Dialogue in NATO, France's Defence Minister Says Amid Submarine Contract Snub