Step-by-Step: How NATO is Creating Its 'Military Schengen' Zone in Europe 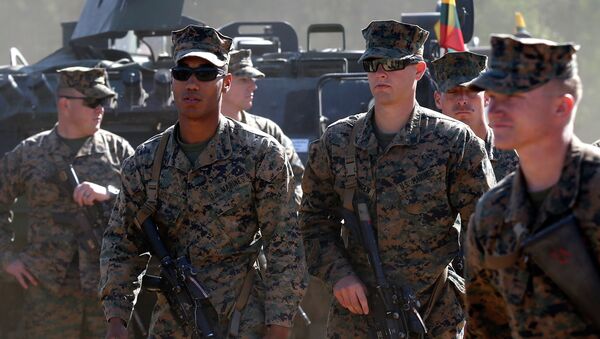 NATO is pushing ahead with its military "Schengen zone" in Europe, integrating new members and signing logistic agreements with others to ensure seamless passage for the bloc's troops through Europe.

Although the NATO bloc had to be disbanded following the collapse of its major adversaries, the USSR and the Warsaw Pact, in the early 1990s, the Cold War relic is seemingly catching a second wind.

"Under the guise of deterring Russian 'aggression,' the US is pushing for a deepening of the alliance, and further undermining the sovereignty of each member state. NATO is also attempting to expand once again, trying to formally secure Montenegro as a member state in the near future, in addition to pulling Georgia closer to the imperial alliance," Steven MacMillan, a geopolitical analyst and editor of The Analyst Report, writes in his article for New Eastern Outlook.

NATO's 'Tank Schengen': Baltic States Call for Free Movement… of Troops
There is only one stumbling block in the way of NATO's "triumphant march": travel restrictions on the movement of US-NATO troops and equipment in Europe.

"We need a Schengen area for American tanks," former Polish Minister of Foreign Affairs Radosław Sikorski said back in October 2015.

The idea was echoed by Elisabeth Braw of the Atlantic Council in her June opinion piece for Foreign Affairs.

"NATO's member states are willing to defend one another, and they have the troops and the equipment to do so. But quickly getting those troops and equipment to their destination is a different matter altogether. In some new NATO member states, bridges and railroads are simply not suitable for large troop movements. But one thing frustrates commanders even more: the arduous process of getting permission to move troops across borders," she wrote.

We need a #Schengen area for American tanks @sikorskiradek #CEPAforum

"With a military Schengen in place, NATO troops and equipment would be able to cross NATO borders to their destination the same way EU citizens do: without having to show permits," she underscored.

Why NATO Rejects Legitimacy of Moscow's 'Security Zone'
However, under the false pretext of the so-called "Russian threat" the US-led Alliance is seeking more control over the continent.

Meanwhile the Baltic States have signaled their willingness to ease travel restrictions on the passage of NATO troops and equipment in Europe.

"We support NATO's open-doors policy," Estonian Defense Minister Hannes Hanso told the national Err.ee broadcaster in late May 2016, ahead of the bloc's largest joint Anaconda-16 and BALTOPS-2016military drills in the region.

But that is half the story: to expand its influence in Europe NATO is actively engaging new states in its fold.

On May 19 NATO Foreign Ministers inked the accession protocol for Montenegro.

Furthermore, on May 25 Sweden's parliament ratified an agreement granting NATO more access to the country for both training exercises and in the event of a war.

The latest developments show clearly that the NATO bloc is serious about boosting its military presence in Europe. In addition to 4,000 forward-stationed troops in the Baltic States and Poland, NATO is likely to deploy an additional 40,000-strong contingent in the region — in close proximity to Russia's borders.

"NATO is a threat to world peace. Its incessant war games and its addiction to antagonizing the Russian bear are putting the future of the world in jeopardy… The abolition of NATO is what is needed to move the world closer to peace," MacMillan underscores.