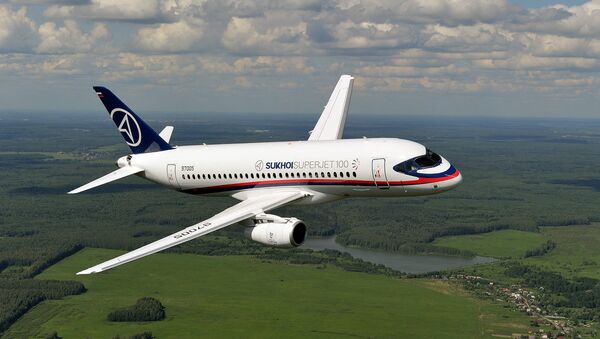 "The resumption of Russian tourism to Egypt can become the key factor driving Egypt to sign new deals on the Sukhoi Superjet, especially given the ongoing upgrades to the Egyptian aviation fleet," Kabeel said, as quoted by the Youm7 newspaper.

The statement came after Kabeel's bilateral meeting with his Russian counterpart, Denis Manturov, earlier on Friday.

In February, Moscow and Cairo signed a memorandum on the delivery of 4 SSJ100 planes to Egypt's Air Leisure charter airline. The deal includes an option for six more aircraft. On February 3, Russian Industry and Trade Minister Denis Manturov said that Russia and Egypt are discussing a possible delivery of up to 40 SSJ100 to the EgyptAir airline.

In May, the Russian trade minister said that the number of Sukhoi Superjet liners to be supplied to Egypt directly depends on the resumption of air traffic between the two countries.

Russia and several other countries suspended flights to and from Egypt last fall after a Russian airliner crashed in the Sinai desert on October 31 while flying from the resort city of Sharm el-Sheikh to St. Petersburg killing all 224 people on board. Militants affiliated with the Daesh terror group, outlawed in Russia, claimed responsibility for what they said was a bomb attack.