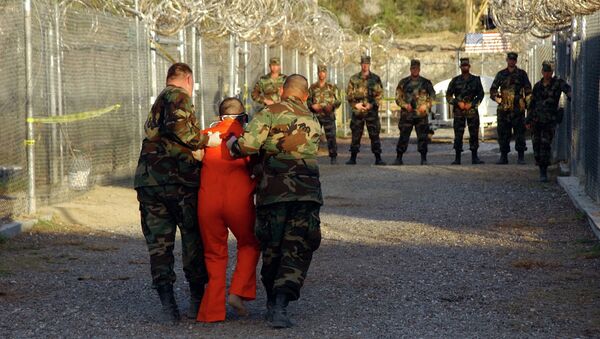 Former chief prosecutor at the Guantanamo Bay detention center said that none of the individuals responsible for the Central Intelligence Agency’s (CIA) torture program have been held criminally accountable for their actions, despite CIA’s recent claims of accountability.

China Censures US Following CIA Release of Torture Program Documents
WASHINGTON (Sputnik) – None of the individuals responsible for the Central Intelligence Agency’s (CIA) torture program have been held criminally accountable for their actions, despite CIA’s recent claims of accountability, former chief prosecutor at the Guantanamo Bay detention center Morris Davis said on Friday.

"Certainly no one has been prosecuted for engaging in or permitting or sanctioning torture, which is literally what the Convention Against Torture requires," Davis told reporters at the National Press Club.

On Thursday, CIA director John Brennan asserted that individuals have been held accountable for the management and systemic failures of the so-called rendition and detention program that was exposed in a 2014 US Senate torture report. Brennan refused to specify who was held accountable or how they were punished outside of a classified setting.

Davis noted that the United States is "really good" about assisting others in the prosecution of leaders who engage in human rights violations.

"I hope at some point that there will be accountability for what we did, because we can’t just ignore it and pretend it didn’t happen," he stated.

In addition to failing to prosecute individuals involved in the US torture program, neither President Barack Obama nor his predecessor George W. Bush have allowed a torture case to be heard before a US federal court. In 2010, the Obama administration struck down an attempted lawsuit involving CIA’s detention and rendition program, under which terrorist suspects were tortured, arguing the program involves state secrets and cannot be decided by the courts.

The US government also refused to hear the case of Canadian citizen Maher Arar who was interdicted in 2002 in New York City and sent to Syria to be tortured for one year under the CIA's rendition and detention program.

Davis resigned from the military in 2008 for reasons that included his objection to torture and injustice at the Guantanamo Bay detention center. He was later fired from a US government job for penning an opinion piece criticizing what he called the "double standard" of justice of Guantanamo military tribunals.

In 2014 the US Senate Intelligence Committee released the summary of its investigation into the CIA’s rendition and detention program, concluding that the United States had engaged in torture during the early years of the War on Terror.

Under the program, which lasted from 2001 through 2007, terror suspects were brought into US custody and sent to sites in more than 50 countries for interrogation. Among the most well-known detention site is detention facility at Guantanamo Bay, where prisoners were subject to torture.