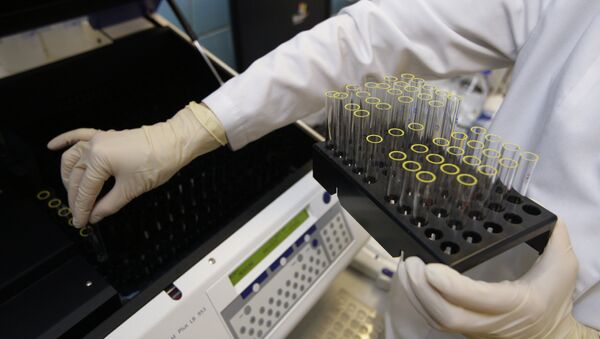 © Sputnik / Valeriy Melnikov
/
Go to the photo bank
Subscribe
The Kremlin is unaware of the foundations for allegations made by the World Anti-Doping Agency (WADA) regarding obstructions to anti-doping officials and the withholding of some doping test results being committed in Russia, presidential spokesman Dmitry Peskov said Thursday.

Russia Confirms Willingness to Cooperate with IOC, WADA to Fight Doping
MOSCOW (Sputnik) — Late on Wednesday, WADA released a report alleging that a number of athletes' doping tests could not be collected by anti-doping officials, hundreds of tests were canceled or declined, over 20 tests were missed and over 50 were found to contain banned substances.

The report also alleged that some Russian athletes have actively avoided taking tests, while anti-doping officials have been threatened by security personnel and Olympic qualifier events have been held in restricted access areas.

"I am not familiar with the details of the report and I do not know what these assertions are based on. Of course, this needs a thorough investigation by our sports authorities, and until this analysis is complete, I do not think that I can say anything insightful as it is unclear what WADA bases on," Peskov told reporters.

Peskov did not comment on Russia's possible moves in case the national athletics team is banned from the Games.

WADA Hopes to Receive Final Results in Meldonium Probe by Mid-June
"I want to avoid making any comments on this matter. This is a sensitive issue. The report was published yesterday, but we did not notice it. That is why I would not make any conclusions in the regard," he said.

The Russian authorities have promised to carry out a clean-up program to fulfill the WADA demands in order for the country's athletes to be allowed to participate in the 2016 Olympics.