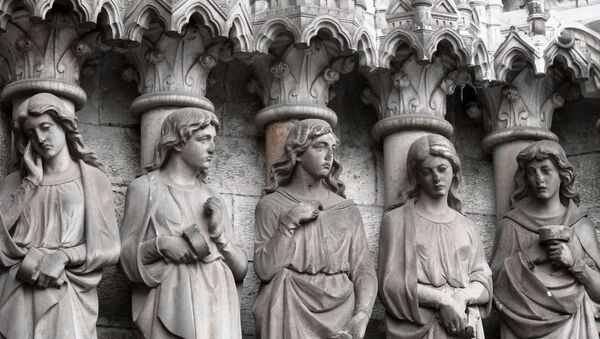 © Photo : Pixabay
Subscribe
International
India
Africa
According to the latest polls, less and less people in Britain have faith in the European Union, but could faith in the Catholic Church change the result of the referendum on June 23?

With less than a week to go before the Brexit vote, and with the "Leave" camp enjoying a six-point lead, Catholic politicians and activists locked horns on Wednesday (June 15), during a debate in Westminster Cathedral, central London.

Conservative MP Thomas Tugendhat and Baroness Newnham — both members of the Remain camp — stood against against Brexiteers Gisela Stuart, Labour MP for Birmingham, and journalist and historian Timothy Stanley, in an event hosted by charity Catholic Voices.

Tugendhat: I do not see EU as a state but as cooperation between nations #CVEUBrexit

Speaking to a pious floor of undecideds, they tried to establish what a good Catholic should do in next week's referendum.

With its 5 million members, the UK's Catholic community are a force to be reckoned with, so could their ballot end up deciding June 23's result?

Prima facie, it would seem that they are bound to vote for remaining in the EU.

The European Union's creators — some of which, like Alcide de Gasperi and Robert Schumann, were very religious — were undoubtedly inspired by Catholic concepts such as subsidiarity, solidarity and peace when they started building the European edifice.

And just weeks ago, the Catholic Archbishop of Westminster Vincent Nichols, made clear that Catholicism steers clear of division, which in his opinion ""almost inevitably leads to further division."

"There is a long tradition in Christianity and Catholicism in particular of believing in holding things together," he added.

"So, the Catholic stance towards an effort such as the EU is largely supportive."

Nichols' points were largely echoed by Tugendhat, who also explained that the EU was partly if not uniquely responsible for Europe's long decades of peace.

"NATO, the Church and the European Union all contributed, in different ways, to the continent's peace and stability," he said.

"Catholic values are best served by unity within the EU."

While acknowledging that the organization is not exempt from defects, Tugendhat said that reforming it was the safest, and the most Catholic course to follow.

Michael Gove said on #bbcqt that the EU is a job destroying machine. Unemployment of under 25s is 51% in Greece because of EU austerity

But pro-Brexit Gisela Stuart retorted saying that the EU's "discriminatory immigration policy" — which favors European over non-European citizens — and "taxation," were damaging the poorest British communities.

Stuart, who is challenging her party's pro-Remain line on the referendum, said that the EU was destined to become an "ever closer union," in order to deal effectively with the euro crisis. Those countries unwilling to integrate further, she argued, should better leave now.

"If [as a Catholic] you think you've got a responsibility to help your neighbor, our responsibility to our neighbors is to leave Eurozone countries to sort out their economy, integrate deeper, whereas for those who are not in there, it should be a trading relationship which is democratically run."

Catholics were once a powerful voting bloc in Britain, able to decisively tip the electoral scales in some English regions and — even much more so — in Scotland. It appears that now, they could also end up shaping the future of Britain's place in the world.