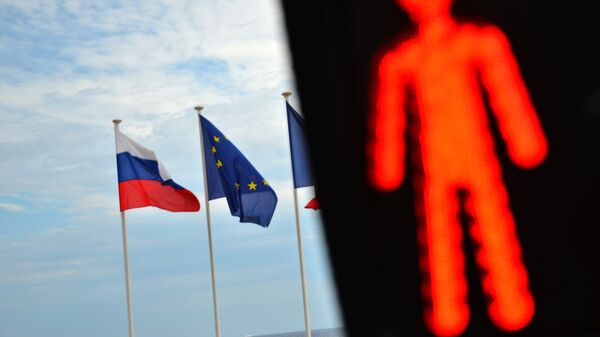 © Sputnik / Vladimir Sergeev
/
Go to the photo bank
Subscribe
Sanctions against Russia should be lifted, former Vice President of the OSCE Parliamentary Assembly, Willy Wimmer told Sputnik. According to him, instead, the West should actively develop economic ties with Moscow.

We Already Have Problems: Sarkozy Calls for Scrapping Anti-Russia Sanctions
"Western sanctions against Russia never made sense," he pointed out.

The US wants to prevent the European Union from expanding trade ties with Russia. The problem is not Moscow, Washington is the problem, he said.

The interview came ahead of the 2016 St. Petersburg International Economic Forum which kicked off earlier on Thursday. The motto of this year’s event is "Capitalizing on the New Global Economic Reality."

The new global economic reality presumes that the international community is abandoning the old type of relations between countries and economies.

"We did our best to include Russia in the World Trade Organization. But when this integration began to progress the West imposed sanctions. The priority should be economy not military hostility. So everyone who works with the EU and NATO should keep in mind the dangers of this cooperation," Wimmer said.

He underscored that currently there is a dangerous trend of "re-militarization" underway in Europe.

Wimmer expressed hope that during the economic forum participants would reach an understanding that the only way to overcome tensions is return to partnership, including intensive economic cooperation.

"Good-neighborly relations mean that partners are engaged in trade cooperation. If not there would be conflicts. Let’s take the example of the United States. Washington is trying to pressure Moscow on all directions. Such a policy would provoke conflicts," he concluded.