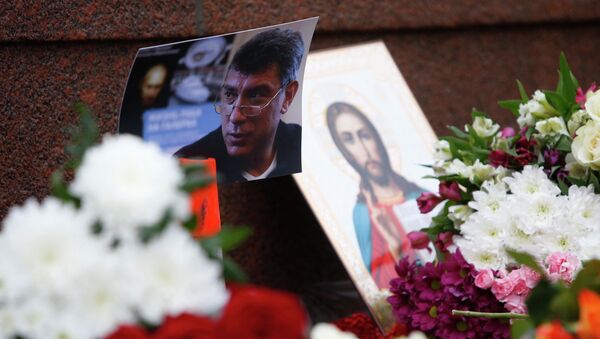 © REUTERS / Sergei Karpukhin
Subscribe
Independent investigators looking into the murder of Russian opposition figure Boris Nemtsov, who have previously claimed the Security Bureau of Ukraine (SBU) may have been involved in the crime, will provide further updates next week, former German intelligence agent and a representative of the investigative group Wilhelm Dietl told Sputnik.

MOSCOW (Sputnik) — On Tuesday, the investigative group called Ost-Objektiv, consisting of a dozen former Western politicians and intelligence officers, presented a report in which they suggested that the SBU could stand to gain from Nemtsov's death by creating unrest in Moscow. The timing of the assassination was thought through, the report suggested, as the politician was due to lead a protest march in Moscow shortly after the fatal attack.

“We have a few more items which we have to check and then we will come up again with additions, probably early next week,” Dietl, who worked for the German Federal Intelligence Service (BND) in the early 90s, said.

He added that none of the Ost-Objektiv group members, whose names are being kept secret, knew Nemtsov in person.

"The group thinks that people tend to forget such events. It is over a year and nothing has really happened, we haven't heard much since last time. And these people [investigators] decided to try to find some more accounts to enlighten this subject," Wilhelm Dietl said, explaining the motives behind the independent investigation by foreign nationals.

Interpol Lists Russian Politician Nemtsov’s Suspected Killer
On February 27, 2015, Nemtsov, who occupied a number of senior positions in the Russian government in the 1990s, and was an active opposition figure in the 2000s, was shot dead in downtown Moscow.

Five persons were detained on suspicion of involvement in the murder — Hamzat Bakhayev, Tamerlan Eskerkhanov, Shadid and Anzor Gubashev and Zaur Dadayev. The alleged mastermind of the murder, Ruslan Mukhudinov, has been arrested in absentia.

000000
Popular comments
Find them ALL. he was opposition not a terrorist. Although, he wanted to destroy Russia. But there are other ways? Anyways, Israel kill them Fast..
cast235
16 June 2016, 14:04 GMT1
000000
still overturning rocks to see what scuttles away.
michael
17 June 2016, 04:07 GMT
000000
Newsfeed
0
New firstOld first
loader
LIVE
Заголовок открываемого материала
Access to the chat has been blocked for violating the rules . You will be able to participate again through:∞. If you do not agree with the blocking, please use the feedback form
The discussion is closed. You can participate in the discussion within 24 hours after the publication of the article.
To participate in the discussion
log in or register
loader
Chats
Заголовок открываемого материала
Worldwide
InternationalEnglishEnglishMundoEspañolSpanish
Europe
DeutschlandDeutschGermanFranceFrançaisFrenchΕλλάδαΕλληνικάGreekItaliaItalianoItalianČeská republikaČeštinaCzechPolskaPolskiPolishСрбиjаСрпскиSerbianLatvijaLatviešuLatvianLietuvaLietuviųLithuanianMoldovaMoldoveneascăMoldavianБеларусьБеларускiBelarusian
Transcaucasia
ԱրմենիաՀայերենArmenianАҧсныАҧсышәалаAbkhazХуссар ИрыстонИронауОssetianსაქართველოქართულიGeorgianAzərbaycanАzərbaycancaAzerbaijani
Middle East
Sputnik عربيArabicArabicTürkiyeTürkçeTurkishSputnik ایرانPersianPersianSputnik افغانستانDariDari
Central Asia
ҚазақстанҚазақ тіліKazakhКыргызстанКыргызчаKyrgyzOʻzbekistonЎзбекчаUzbekТоҷикистонТоҷикӣTajik
East & Southeast Asia
Việt NamTiếng ViệtVietnamese日本日本語Japanese中国中文Chinese
South America
BrasilPortuguêsPortuguese
NewsfeedBreaking
19:33 GMTGlobal Oil Prices to Average $70 per Barrel in 2022, US Energy Agency EIA Says
19:31 GMTUS DoJ Seeks to Strip Steve Bannon's Defence of Main Evidence Ahead of Criminal Contempt Trial
19:30 GMTJust 3 in 5 US Republicans Trust Doctor Advice, Down 13 Points During Pandemic – Poll
19:13 GMTState Department Spokesperson Price Briefs Press in Washington, DC
18:27 GMTUS Slaps Commander of Iran's IRGC Basij Forces With Sanctions
18:18 GMTBiden Warns Putin of Economic Sanctions and Other Measures in Event of Ukraine Military Escalation
18:18 GMTWashington's Major Intersection Blocked by Protesters Demanding Cut to Defense Budget
18:05 GMTCapitol Riot Probe: Mark Meadows to Cease Cooperation With Jan. 6 Panel
17:59 GMT80th National Pearl Harbor Remembrance Day Held in Hawaii
17:53 GMTProposed US Defense Spending Bill Does Not Include Nord Stream 2 Sanctions
17:45 GMTMinsk Introduces Embargo on Some Goods in Response to Western Sanctions
17:37 GMTPentagon: Terrorist Threat to US From External Attacks Lowest Since 9/11
17:30 GMTUS Judge Rules Against Coronavirus Vaccine Mandate for Federal Contractors
17:17 GMTIOC Executive Board Holds Press Conference Amid US Diplomatic Boycott of Beijing Olympics
16:51 GMTIsraeli Prime Minister Claims Country Is 'Fighting Off Forces of Evil' Every Day
16:51 GMTApple CEO Reportedly Lobbied Chinese Officials to Get Preferential Treatment in Country
16:44 GMT'F**k You': Rittenhouse Hits Back at LeBron James After Basketball Star Doubts Tears in Court
16:38 GMTCan It: Elon Musk Rips Joe Biden’s Build Back Better Bill, Calls on Senate to Not Pass It
16:31 GMTUS Would Urge Germany to Halt Nord Stream 2 Pipeline if Russia Invades Ukraine, Reports Say
16:16 GMTMan Kills Family, Himself Over Fake Vaccine Certificate in Germany, Reports Say