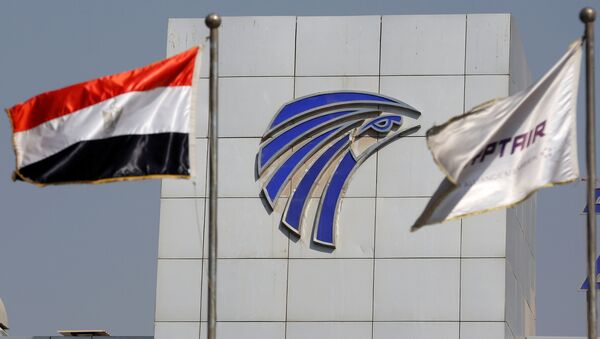 © REUTERS / Amr Abdallah Dalsh/File Photo
Subscribe
Search vessel John Lethbridge of the Deep Ocean Search company has found and recovered a voice recorder from the EgyptAir A320 Plane, that crashed in the Mediterranean Sea in May, Egyptian aircraft accident investigation committee said Thursday.

EgyptAir Wreckage Found in Mediterranean Sea by French Vessel
CAIRO (Sputnik) — According to the statement, the voice recorder was delivered to Alexandria, where it will be examined by investigation committee's members.

"The recorder was recovered at several stages, as it has been damaged and broken up into several parts. Using the ship's equipment, the part, that contained the device's hard drive, which is the most important part in the recorder, was recovered," the statement said.

On May 19, the EgyptAir Airbus A320 plane disappeared from radar screens over the Mediterranean Sea, 10 miles into Egyptian airspace. The plane was headed from Paris to Cairo.

Egyptian Minister of Civil Aviation Sherif Fathi later confirmed that some debris from the plane and remains had been recovered. The search operation is still underway and involves the naval and air forces of Egypt, France, Greece and the United States.