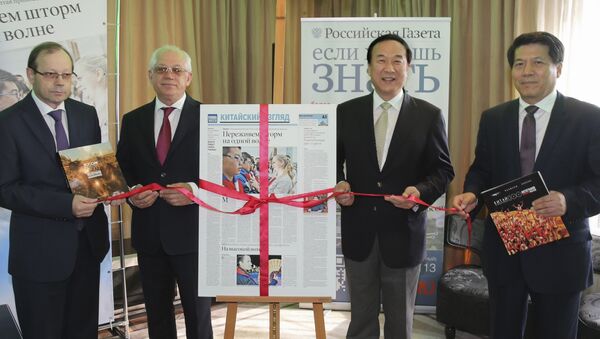 As a China Daily supplement, China Watch has been telling China's story in English, French, German and Spanish, Zhu said at the launch ceremony.

Li Hui, China's ambassador to Russia, said, "Congratulations on the publication of the Russian edition of China Watch. As President Putin is expected to visit China soon, the launch will help pave the way for the visit. I believe it will boost the understanding of the peoples of the two countries."

During the launch ceremony, the two newspapers also jointly unveiled a photo album —One Hundred Photographers Focus on China.

Zhu said publication of the Russian edition of China Watch and the new album signifies the friendship and cooperation momentum between the two nations and their peoples, adding that it will help Russian people to understand China better and intensify ties and the partnership between the two countries.

All Aboard! Russia Builds Bridge to China, Connects With 'New Silk Road'
Pavel Negoitsa, publisher of Rossiyskaya Gazeta, said the album is the second example of cooperation with Chinese media after the release of the photo albumOne Hundred Photographers Focus on Russialast year. Such cooperation testifies to the lasting friendship of the two countries, he said.

Kaminskaya Kseniya, deputy director of the Russian government's News and Information Department, said that when Russian Prime Minister Dmitry Medvedev had visited China he took photos. Medvedev has contributed three pictures to the new album, showcasing the high level of attention he pays to Sino-Russian relations.

Negoitsa said Sino-Russian friendship has passed through generations and should be passed on to the next generation.

China Watch reaches more than 50 million readers in political and business circles with help from the circulation channels of newspapers in various countries.

The publication is circulated with The Washington Post and The Wall Street Journal in the United States; The Daily Telegraph in Britain; The Sydney Morning Herald, The Age, and Financial Review in Australia; Le Figaro in France; Handelsblatt in Germany; The Nation in Thailand; The Jakarta Post in Indonesia; and Uno and El Cronista in Argentina.