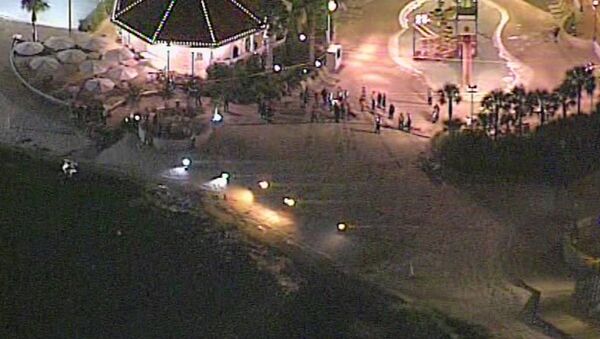 © AP Photo / WKMG
Subscribe
The beaches at Walt Disney World resorts were closed on Wednesday, after a two-year-old boy was dragged into the water from the shore by an alligator. On Wednesday afternoon, the body of the small child was recovered.

The incident took place on Tuesday evening in a man-made lake at the Grand Floridian hotel. A family of four, on vacation from Nebraska, were by the water as night fell.

There are numerous prominently-displayed signs along the beach alerting visitors that swimming is restricted, but parents and witnesses claim the small boy was wading a couple of feet from the water’s edge.

When the toddler was grabbed, the father jumped into the water attempting a rescue. The father’s hand was injured but he was unable to retrieve his son. A nearby lifeguard also attempted unsuccessfully to rescue the child.

The investigation and search for the killer alligator was still underway on Wednesday, and officials captured five alligators from the water and cut them open — with no signs of the boy. Late in the afternoon, it was reported that his body had been recovered.

The lake covers approximately 200 acres, feeding streams and canals throughout the Disney property, and reaches a maximum depth of 14 feet. There were over 50 law enforcement officials engaged in the search, as well as an alligator tracker and marine units using sonar.

"There are no words to convey the profound sorrow we feel for the family and their unimaginable loss. We are devastated and heartbroken by this tragic accident and are doing what we can to help the family during this difficult time. On behalf of everyone at Disney, we offer our deepest sympathies," a statement from Walt Disney World President George A. Kalogridis read.

Fatal attacks by alligators are rare, with 23 fatalities from the large reptiles recorded since 1973, eight of which children ranging in ages from two to 16.

000000
Popular comments
Meanwhile in other news, 200 people were killed by motor vehicles in the USA today.