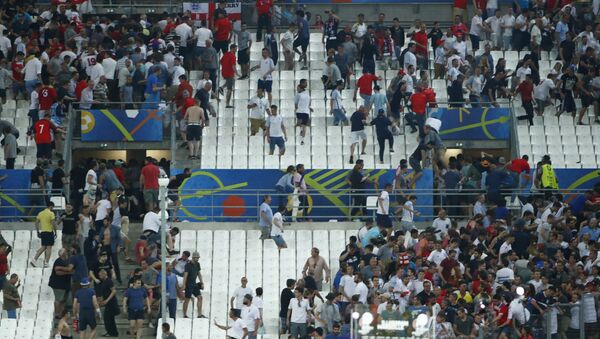 The prefect of a northern French region urged not to judge all Russian football fans by the recent clashes in Marseille.

France Should Expel Russian, UK Football Fans Involved in Clashes
LILLE (Sputnik) — The prefect of the northern French region of Nord-Pas-de-Calais-Picardie on Wednesday urged the public not to paint all Russian football fans with one brush following the recent violent clashes in Marseille.

"There are a lot of speculations on this subject in France now, I believe it is time to stop this… In every country there are people who come to football matches not out their love of sport but their love of violence," Michele Lalande told reporters before the start of the Euro-2016 group stage match between Russia and Slovakia in the French city of Lille.

On June 11, the Russian national football team drew with England in a match in the French city of Marseille. After the match, violence erupted between Russian and English fans at the stadium and in the port town. As a result, at least 30 people were injured, one of whom has been left in a coma.

Emergency measures have been taken by French police to ensure security in Lille in order to avoid a repeat of the violence seen in Marseille. Around 4,000 law enforcement officers are maintaining order during Wednesday's match.