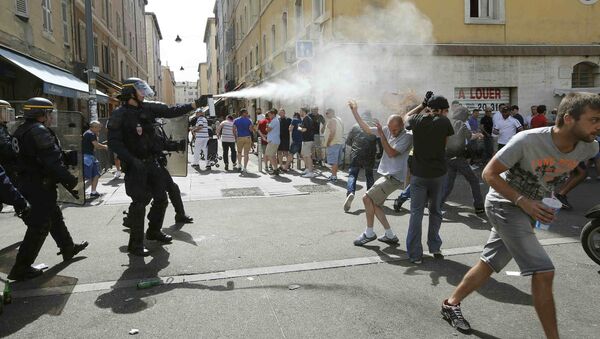 In recent years sport has become politicized, thus, unsurprisingly, Euro 2016 has suddenly turned into a political battlefield with Russia as the major "culprit."

Furthermore, Russia has been given 'suspended disqualification' from Euro 2016.

​"France wants to deport almost 50 Russian soccer fans, Alexander Shprygin, the head of a Russian supporters' group, said on Tuesday, adding that French riot police had stopped a bus carrying fans in Cannes who were on their way to Lille," Reuters wrote Tuesday.

But how did it all begin?

According to independent journalist and geopolitical analyst Martin Berger, it is well documented that even before the beginning of Euro 2016 English fans were asking for trouble.

Besides the fact that they were spotted fighting Marseille's "ultras" they went even so far as to mock representatives of the local Muslim community, the journalist notes, citing the Daily Mail. It should be noted that Muslims make up around a third of Marseille's population.

"The aggressive actions of British hooligans before Euro 2016 were described in much detail by both The Guardian and The Independent. It's been reported that they were chanting 'ISIS [Daesh], where are you?', singing insulting songs, and destroying the private property of local residents. They even assaulted a bus that was painted in the colors of the Russian flag," Berger narrates in his article for New Eastern Outlook.

UEFA Gives Russia Suspended Disqualification From Euro 2016
Later, on Friday clashes erupted between Russian and English football fans. At the end of the match between Russia and England clashes were registered again.

However, it was not the only disturbing episode of Euro 2016: on Sunday conflicts erupted between French "ultras" and football fans from Poland and Northern Ireland in Nice, according to local officials.

But that is not all, on Monday Deutsche Welle reported a violent skirmish between German and Ukrainian fans in the French city of Lille which took place on June 12.

"In the latest incidents of violence in Lille, around 50 German hooligans attacked Ukrainian fans ahead of their group stage encounter on Sunday," the media outlet narrated.

Football Fans' Clashes in France Absolutely Unacceptable - Kremlin
According to Berger, "the sport has increasingly become subjected to political meddling." Furthermore, the sport has become part of a Western anti-Russian media campaign.

A series of materials aimed at defaming Russian athletics were recently released by Western media including a documentary on doping in Russia by German broadcaster ARD.

"In this case, we still consider it unproven slander. We are still convinced that doping must be fought. This fight is constantly carried out in our country, including in line with the Russian president's instructions," Kremlin spokesman Dmitry Peskov told journalists on June 9, commenting on ARD's documentary.

One of the reasons behind the doping scandal could be Russia's hosting of the 2018 FIFA World Cup, Sports Minister Vitaly Mutko told reporters in early June.

"Today, the Cold War is over but political meddling in sports refuses to become part of history. Instead, an ever-increasing number of sporting events are being subjected to political pressure," Berger stresses.