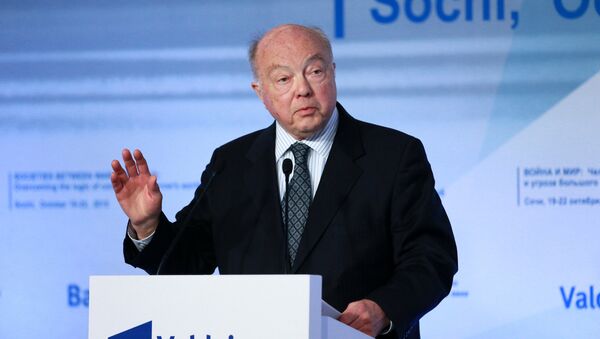 © Sputnik / Anton Denisov
/
Go to the photo bank
Subscribe
Pursuing additional strategic nuclear reductions with Russia will be nearly impossible if the United States continues its military expansion in Eastern Europe, former US Ambassador to the Soviet Union Jack Matlock said on Tuesday.

Obama Claims Russia Uninterested in Further Reductions of Nuclear Weapons
WASHINGTON (Sputnik) — He emphasized the importance of bilateral confidence building and nonproliferation efforts, stating that because both the United States and Russia are nuclear superpowers that pose a mutual existential threat to one another, "there can be no war between us."

"It is urgent to restore that cooperation [to reduce nuclear arsenals] if we are to inhibit further proliferation. We are unlikely to do so if we proceed with plans to increase our military presence in Eastern Europe," Matlock told the House Foreign Affairs Committee.

The United States and Russia concluded their last major nuclear arsenal reduction in 2010 with the New Strategic Arms Reduction Treaty (START), cutting the number of deployed nuclear warheads to 1,550 by 2018.

Matlock emphasized that since New START, "nuclear cooperation with Russia has deteriorated and seems practically non-existent."

NATO to Discuss Adjusting Nuclear Posture in Light of Russia’s New Strategy
Moreover, Matlock confirmed that the United States reached an agreement with the former Soviet Union at the end of the Cold War committing not to expand NATO in exchange for Soviet withdrawal of troops from eastern Europe.

US Congressman Dana Rohrabacher asked Matlock during a House Foreign Affairs hearing whether there was an understanding that "we [the United States] would not have an expansion of NATO so that Russians would withdraw their troops" from eastern Europe.

Matlock, the US Ambassador in 1991, confirmed that "it was indeed the understanding at that time." He added however that it was "not a legal commitment."

NATO has repeatedly argued that its expansion over the past thirty years does not violate any agreements reached with Russia during the breakup of the Soviet Union. By 2009, all former Warsaw Pact nations were NATO members.