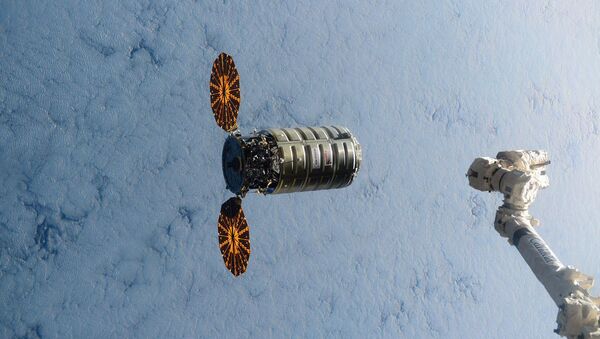 © AP Photo / Scott Kelly/NASA
Subscribe
A US unmanned Cygnus cargo ship has detached from the International Space Station (ISS) to carry out tests with fire in space, NASA announced Tuesday.

The experiments will be conducted on board of the ship several hours after undocking from the ISS Unity module. One experiment is aimed at determining how big fires grow outside of the Earth's atmosphere.

Experts Fear Chinese Space Station Could Crash Into Earth
The Spacecraft Fire Experiment (Saffire) will take place when the unmanned ship reaches a safe distance from the ISS and will not pose a danger to astronauts, NASA stressed.

NASA specialists will ignite a fire in a module containing a 38-inch by 19-inch (97 cm by 49 cm) cotton-and-fiberglass material sample, and monitor its behavior remotely.

The experiment will begin with igniting the sample. Air flowing through ducts will fan the fire, which is expected to burn for about 20 minutes. Scientists want to find out how microgravity influences the growth of fire, whether the force will limit flames, and how materials burn.

​Specialists on Earth will receive data recorded by fire and oxygen sensors installed on the ship and images from onboard cameras. They hope the findings will assist them in developing ways to suppress fire during space missions.

"NASA's objective is to reduce the risk of long-duration exploration missions, and a spacecraft fire is one of the biggest concerns for NASA and the international space exploration community," said Jason Crusan, NASA director of advanced exploration systems, as cited by CBS.

Abandonment of Russian Rocket Engines May Ground Pentagon’s Space Plans
In addition, five lightweight LEMUR satellites will be launched into space from Cygnus to help monitor meteorological conditions and the movement of sea-craft. The cargo ship will also take out about two tons of waste and used materials from the space station.

Cygnus will stay in orbit until June 22, before entering the Earth's atmosphere and burning up above the Pacific Ocean in a controlled reentry.

Cygnus, produced by the US Orbital ATK company, docked with the ISS late in March. Cargo included drinking water, food supplies, a 3D-printer and equipment to determine the chemical makeup of meteorites reaching Earth atmosphere.

The next Cygnus spaceship is set to depart for the ISS on June 6.

000000
Popular comments
More U.S propaganda? I was seeing a documentary on the F16!!!! The U.S claims is THE BEST PLANE EVER on earth. Then I told the people watching to check the F 16 record against , FOR EXPORT, MIG 23's. It was like clubbing baby seals. they were appealed.. They just claim it was the best innovation on air EVER. Just to find it was clubbed all over by MIG 23's ... And this way all you hear is about west PROPAGANDA.. The truth? IF Russia wouldn't had allowed the Russian space station to be used at platform, west would had still trying to figure out how to stick it together. No is FIRE? Dangerous. Russia should do fire experiments. Create controlled glass box etc. But is good, and will contribute to world understanding and future missions for ALL.. I think is GREAT!!
cast235
15 June 2016, 02:21 GMT
000000
let's hope for a successful experimental result.
michael
15 June 2016, 02:38 GMT
000000
Newsfeed
0
New firstOld first
loader
LIVE
Заголовок открываемого материала
Access to the chat has been blocked for violating the rules . You will be able to participate again through:∞. If you do not agree with the blocking, please use the feedback form
The discussion is closed. You can participate in the discussion within 24 hours after the publication of the article.
To participate in the discussion
log in or register
loader
Chats
Заголовок открываемого материала
Worldwide
InternationalEnglishEnglishMundoEspañolSpanish
Europe
DeutschlandDeutschGermanFranceFrançaisFrenchΕλλάδαΕλληνικάGreekItaliaItalianoItalianČeská republikaČeštinaCzechPolskaPolskiPolishСрбиjаСрпскиSerbianLatvijaLatviešuLatvianLietuvaLietuviųLithuanianMoldovaMoldoveneascăMoldavianБеларусьБеларускiBelarusian
Transcaucasia
ԱրմենիաՀայերենArmenianАҧсныАҧсышәалаAbkhazХуссар ИрыстонИронауОssetianსაქართველოქართულიGeorgianAzərbaycanАzərbaycancaAzerbaijani
Middle East
Sputnik عربيArabicArabicTürkiyeTürkçeTurkishSputnik ایرانPersianPersianSputnik افغانستانDariDari
Central Asia
ҚазақстанҚазақ тіліKazakhКыргызстанКыргызчаKyrgyzOʻzbekistonЎзбекчаUzbekТоҷикистонТоҷикӣTajik
East & Southeast Asia
Việt NamTiếng ViệtVietnamese日本日本語Japanese俄罗斯卫星通讯社中文（简体）Chinese (simplified)俄罗斯卫星通讯社中文（繁体）Chinese (traditional)
South America
BrasilPortuguêsPortuguese
NewsfeedBreaking
19:39 GMTGlobal Stock Markets Plunge as Chinese Giant Evergrande Faces Mountain of Debt
19:34 GMT'He's a Threat': Head of India's National Commission of Women Hits Out at New Punjab State Chief
19:34 GMTDelhi Hospital Reports First Patient With Black Fungus in Lung and Kidney
19:28 GMT'Huge Insult to Dalit Community': BJP Scoffs at Congress' 'Empowerment Narrative' in India's Punjab
18:59 GMTBritain’s Former Ambassador to NATO Warns AUKUS Sub Deal Could Sink Alliance
18:55 GMT'Not Premeditated': New Book Reportedly Reveals How Biden Explained His 'Killer' Remark to Putin
18:50 GMTTwitter Down for Users Worldwide
18:46 GMTUN Refugees Chief Says Global Community Must Avoid Afghanistan's ‘Implosion’
18:46 GMTUS Launches Air Strike on 'Senior al-Qaeda Leader' in Idlib, Syria
18:44 GMTBiden to Hold Call With French President in 'Coming Days'
18:39 GMTJapan Wants Quad Navies to Hold Malabar Naval Drills in South China Sea
18:30 GMTUS Sanctions 7 Central American Officials Over Alleged Corruption
18:24 GMTUS Treasury Chief Warns ‘Economic Catastrophe’ Will Befall America If Debt Ceiling Deal Not Reached
18:09 GMTPicasso’s Daughter Donates 9 Heirlooms in Tax Arrangement With France
18:01 GMT'F**k Off, Leave Me Be Please': Sex Education’s Asa Butterfield Annoyed With Pic-Taking Fans
17:56 GMT'Booby' Prize: XR's Topless Protester Goes Bust to Raise Funds on OnlyFans
17:51 GMTPorn Case: Businessman Raj Kundra Granted Bail After 2 Months of Arrest
17:47 GMTKosovo Police Reportedly Use Tear Gas Against Serbian Protesters
17:44 GMTLawyer for Trump Organization’s Ex-CFO Has ‘Strong Reason to Believe’ More Indictments Looming
17:36 GMTMystery Death: Noted Hindu Seer Found 'Hanging Inside Monastery' in India