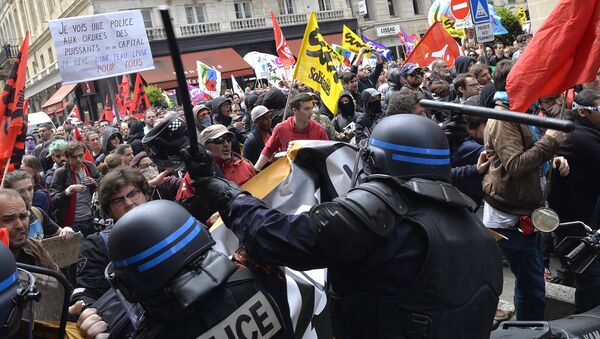 © AFP 2023 / Georges Gobet
Subscribe
International
India
Africa
The seven main French unions are Tuesday (June 14) hoping to summon a million workers to the streets of Paris to protest against French President Francois Hollande's controversial labor reforms, despite falling support for the mass protests that have hit France since early March.

Embattled Hollande: Strikes During Euro 2016 'Incomprehensible'
France has been hit with a series of strikes and mass demonstrations since March, bringing chaos to the rail network, the Paris Metro and airlines, as well as road transport, because of industrial action and blockades at fuel refineries and depots.

Principally, the protests are against reforms to the highly codified French labor laws — known as the Code du travail — in order to give employers more flexibility. The labor reforms were largely directed at making companies take on more workers on permanent contracts, rather than temporary ones, to bring down the unemployment rate from ten percent. The proposals would give employers more scope to lay-off workers and cut costs and allow some employees to work far longer than the current 35-hour week.

​The reforms were pushed through by Hollande, who invoked a little used piece of the constitution — Article 49.3 — to bypass the upper house — the Senate — which is dominated by Republicans, who are against the reforms.

However, opinion polls show that, while four out of five, disagree with the labor reforms, there is dwindling support for the industrial action — particularly with the eyes of the world on France, which is hosting the current Euro 2016 football tournament. France 24 reported that only 4.5 percent of employees at state-owned national rail company SNCF were on strike Monday (June 13) — which is significantly smaller than previously.

World
Will France Keep Burning? Anger Rages in the Streets Over Labor Reform

They are hoping to stage a mass protest Tuesday (June 14) to bolster support for the campaign to have the labor reforms overturned, despite the loss of public support.

Meanwhile, the Senate is debating the labor reforms and is set to force a vote on the issue, provoking a constitutional crisis over the supremacy of the upper house. The Senate is considering using its powers to make some changes to the reforms — particularly over the 35-hour week.

With the French law authorities under pressure over violence at Euro 2016, tensions high over terror threats — with the killing Tuesday (June 14) of a police commander and his police employee wife by a man claiming to represent Daesh, also known as ISIL — and waning support for mass protests, the unions are struggling to rally the million they want.